Bigger the car, bigger the attitude

By Dilip D''Souza
Last updated on: August 26, 2010 11:29 IST
Who's the genius who came up with this idea of asynchronous wipers? Dilip D'Souza on pretentious cars that cost way too much. 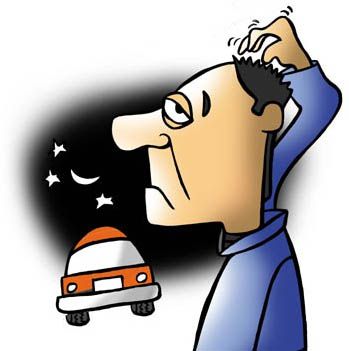 In my last column here, I mentioned in passing pretentious cars that cost way too much, specifically how they have, believe it, asynchronous wipers. Who's the genius who came up with this idea, I want to know.

'Hey, we've been tasked with adding something trivial to these cars that makes no difference to anything, but let us charge the suckers plenty more than they already pay. Any ideas?'

Thus were they born, wipers that operate at different speeds. Only on the highest-end cars. (I have it on good authority that 'Audi' is old German for 'Pointlessly Expensive').

Actually I was first struck by the pretentiousness of certain cars years ago in the States, when I found that some wannabe American cars -- your Buicks, your Cadillacs, your Oldsmobiles -- advertised their engine size on their sides. Why would anyone care to know your car's engine size, right? I mean, do you walk around with a prominent label saying 'Waist Size 39.5 Inches And Counting'?

But these wannabe car guys took it one step further than just the engine size. The little label said '3.5 Litre'.

Note the carefully British spelling, 'litre'. This was America, where they normally spell it 'liter' (and 'meter' and 'ardor' and 'whiskey' and 'famos' ... ok, maybe not that last). Yet to give the car that elusive snob appeal, to imbue it with -- of all things! -- an English cachet, they spelled it 'litre'.

I like to think it is an unbroken line of pretentiousness that stretches from there to wipers that operate at different speeds.

And there are indeed, no I was not joking, the arrays of blindingly bright silver lights. No figment of the imagination, I promise you. You've seen these on massive cars whose drivers seem particularly intent on running you down as you try to cross the road: Audis, Porsches and the like. (Yes, why do the drivers of these brands develop an attitude?)

Even in broad daylight, even in sunshine so you've gotta wear serious shades, these chunky clumsy beasts bear down on you with their shiny bright spots arranged in a curve below the headlights like some gleaming underwire bra no woman would be caught dead wearing. I mean, I am yet to meet the lady who wants little lights shining from her chest, let's leave it there.

But what are the lights all about, really? Am I going to jump out of the way more readily because I've been blinded by little silver lights? Do they make navigation any easier? Is this just one more ruse to make you pay more for the car?

There's no end to the schemes people will devise to separate suckers for cars from their money, and it is an open secret that every such scheme works. If it's not little lights and wipers on their own trip, it's number plates. Yes. Money to be mined there too.

A few years ago, the Bombay Times front page carried a piece called 'What's on your plate, mate?' about customised car number plates. Apparently, these cost 'anywhere between Rs 5,000 to Rs 25,000 upwards.'

Well! I'm glad we've got that price narrowed down!

Also, these plates reflect what the report calls a 'wear-your-attitude-on-your-car' trend. What all of us want to do, right, wear our attitude on our cars? Even if we have no clue what it means? Excuse me while I dig out that waist-size label once again...

Are you ready for this? Are you sitting down?

Positively oozes attitude, don't you think? In fact, I believe that 'E' even stands for 'Attitude', except that license plate issuing authorities misspelled it, understandable given that they laughed so much at Parvez they had tears in their eyes. 'Give this next bozo MH-43-UR-8342,' one was heard to say through his tears. 'A-tree-for-two, get it?'

The way some guys get their kicks.

But for Parvez, the best thing is that the number works like a dream. It makes 'girls give his car a second look', and that 'makes Parvez's day'! 'The outcome', Parvez told Bombay Times with a wink, 'is spot on!'

Me neither. She'll probably have those lights on her chest.