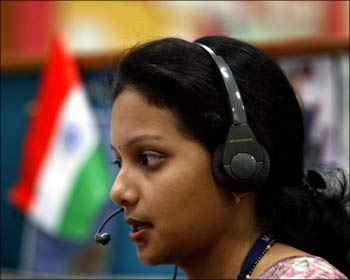 Rather than creating hurdles, America and Europe must thank Indian IT firms for coming to their rescue and increasing the productivity of their corporations, says Sanjiv Kataria.

However, the highly regarded industry with its 3 million-plus software professionals, comes under attack every now and then from the very nations that save costs by outsourcing to India -- dubbing it a nation producing 'cyber coolies' to being 'Bangalored' (a term used when losing a job to an Indian outsourcing centre) and to being referred to as 'chop shops'.

The West's fear of losing jobs to any Indian software development centre not necessarily in the city of Bengaluru has given rise to another phrase: 'Bangalore phobia'.

The latest attack on the industry from US Senator Charles E Schumer (Democrat) from New York raised several eyebrows in India. To add insult to the injury, Indian software firms will have to bear an additional burden of $200-250 million in the form of H-1B and L1 visa fee hike.

By targetting Indian software firms and singling out an iconic firm like Infosys, the US senator missed the ingenuity of the Indian mind.

To dub the work being done by the Indian software professionals as low-tech is not only unfair but unwarranted. And to term the Indian IT services companies as 'chop shops' is a great disservice, especially when they have contributed to the development of American and European economies.

A recent Nasscom-Evaluserve study estimates that in 2009 the US and European companies saved $25 to $30 billion by outsourcing software development work to Indian companies.

The $140-billion Indian ICT industry forms not only one-tenth of India's GDP but has built substantial knowledge capital too. It has two big components -- the $78-billion IT industry and the $63-billion telecom industry, as per recent studies by Dataquest and Voice&Data.

Of the $78 billion generated by the IT industry, two-thirds come from export of IT services and one-third is contributed by the domestic IT sector. Within the IT services exports of $52.6 billion, exports to the United States form nearly three-fifth, and Europe adds up to nearly one-fifth.

Even those who started by offering body-shopping services to the American and European clients in the 1980s today operate at the top end of the value chain -- IT consulting and business transformation services.

So it is software development and maintenance services valued at $17 billion that is the biggest chunk of the software exports, while new high-end projects in the IT consulting and package implementation, software product development, telecom software and engineering services value more than $3 billion each.

India's strength lies in its extremely robust higher education system with strong focus on mathematical skills and English language, which is a result of a conscious investment made by the government in setting up institutions like the IITs, IISc, RECs, ISRO and BARC to gain technical self-sufficiency.

"Alumni of Indian government-funded engineering schools like IITs have created intellectual property for the US and strengthened their ability to offer a better standard for American citizens," said IDC India recently.

"The US lawmakers must recall that H1B/L1 visa regime was created as a legally sanctioned means to allow US firms to induct scarce skills to benefit the US economy," it states further.

Even if we were to empathise with the argument that the US economy needs to banish unemployment, these countries cannot overcome skill shortage in the long run.

The drastic drop in the enrolment of American students in the science and engineering programmes is an indicator that there is no quick fix the help grow the local talent pool in the software space.

Both America and Europe must thank the Indian software industry for coming to their rescue and increasing productivity of their major corporations.

The Western world has to realise that by adopting restrictive policies on free access to talent-based services, they can only hurt their own economy.

Moreover, they won't be able to top the list of countries vying for a limited pool of skilled professionals, and thus power their economies, in the absence of a reliable IT partner like India.

As for Indian software companies, the best advice comes from Infosys co-founder N R Narayana Murthy: 'They must continue to innovate and enhance their productivity so that the world looks up to the technical prowess of the Indian software sector.'

Coast Guard asks BARC not to use sea water