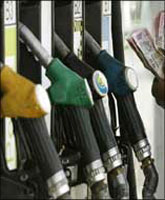 There is a sense of deja vu about the report of the Kirit Parikh Committee on the pricing of petroleum products.

The recommendation to move to market-pricing for petrol and diesel and a formula-based hike for LPG and kerosene has been made before in several reports, including those prepared by C Rangarajan and BK Chaturvedi.

If the government does finally implement the Parikh committee recommendations, it will only be picking up the threads from the reformed situation prevalent way back in 2002!

The National Democratic Alliance government did, in fact, deregulate pricing of petrol and diesel and did manage to keep kerosene subsidies down at 33 per cent and those on LPG at 15 per cent. It is true that in the months prior to the elections, the NDA resorted to political pricing rather than market-based pricing and didn't allow fuel prices to rise.

However, even after elections and even in the face of rising global fuel prices, the United Progressive Alliance government did not return to market-based pricing of petro products. The Congress party and its allies recklessly politicised energy pricing, with no concern for the financial health of oil companies.

Against this background, the magnitude of the hikes recommended by the Parikh committee -- petrol prices are to be raised by Rs 4.72, diesel by Rs 2.33, kerosene by Rs 6 per litre and LPG by Rs 100 a cylinder -- makes it unlikely that the government would accept all the recommendations.

The UPA constituents have already criticised the report's recommendations. Given that there is only one assembly election scheduled later this year, the government should gather the courage to go ahead and bite the bullet on this issue, even if there would be some inflationary impact.

The room for manoeuvre is perhaps the highest at this point in time.

That said, it is clear UPA-II has a lot to learn from the NDA. The NDA, for instance, started market-determined pricing at a time when global prices were falling -- the first few price changes, as a result, were downward revisions, and helped bust the view that market-pricing implicitly meant higher prices.

The NDA also mastered the art of small price hikes (it did this 33 times!) and so managed to keep the opposition to it muted. As a result, in its six years in office, kerosene prices rose from Rs 2.5 per litre to Rs 9, while in the UPA's six years this has risen to just Rs 9.2.

While UPA-II has clearly lost the chance to move to market prices during the time global crude prices were falling, the lesson of small and frequent changes is too obvious to miss. It is equally true that, since a very large proportion of kerosene sold doesn't reach the poor but gets siphoned off to adulterate diesel, any opposition in the name of the poor has to be taken with more than a pinch of salt.

It is also worth keeping in mind that a hike in prices will do wonders for the government's finances as well. The Parikh recommendations are supposed to lower under-recoveries of oil PSUs by around Rs 30,000 crore (Rs 300 billion) -- since this goes directly to the companies' bottom line, it means a large hike in their market capitalisation and hence in the value of the government's shareholding in them.

Based on the government shareholding in the PSUs, that would mean a rise of Rs 280,000 crore (Rs 2,800) in the government's wealth. Imagine what divesting even a part of this will do to Pranab Mukherjee's Budget deficit.