The challenge before India is to make the process of development inclusive so that the gap between the rich and the poor decreases, says Sandeep Pandey. 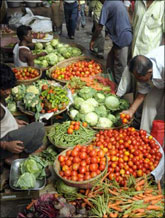 One for that section of the society which enjoys the most modern fruits of technological development and the other for whom the same machines that make life easier for the first class are a threat and are banned under NREGA.

This dichotomy is reflected in all areas of human life - education, health care, etc.

The challenge before India is to make the process of development inclusive so that the gap between the rich and the poor decreases, which according to the prime minister is the cause for social unrest in this country and is being manifested in the increasing areas under Naxal influence.

Unfortunately the benefit of most of the social welfare and development schemes, even in non-Naxal affected areas, does not reach the deserving poor. Unscrupulous people siphon away all the benefits and because of this the poverty doesn't go away.

Acts like the RTI (Right to Information) and NREGA (National Rural Employment Guarantee Act) have brought in mechanisms to ensure greater transparency and accountability in governance.

The provision of social audit in NREGA should be extended to all schemes and departments. NREGA has made two important differences -- payment of full minimum wages to daily wage workers for the first time in country and shifting the initiative of employment generation from the hands of bureaucracy to that of workers.

When a worker makes an application for work under NREGA the work must be given to her within 15 days otherwise she becomes eligible for unemployment allowance.

The Food Security Act must be implemented quickly bringing within its purview PDS, ICDS, MDM, etc., to ensure that the benefits of these schemes reach the deserving poor. Hopefully, like the NREGA the FSA will also be an empowering experience for the people.

To strengthen rural economy decentralised land and water management should be undertaken. The Land Acquisition Act should prohibit acquisition of land belonging to small and marginal farmers.

Landless workers should get credit on their NREGS job cards and there should be a provision to repay the loan from wages earned under NREGS. All agricultural labour work should be paid for under NREGS.

There should be flexible policy towards granting of BPL (below poverty line) and Antyodaya ration cards. Annapurna scheme should be restored to prevent starvation deaths.

If a family thinks they can't do without the government's support they have a right to access the subsidy in order to ward off poverty and hunger.

There are chances of misuse but then unscrupulous elements are anyway taking everybody for a ride at the moment and the government seems to be totally at a loss to check this.

India should stop chasing the mirage of nuclear energy. Like the European Union and Japan, it should invest its research resources in renewable sources of energy.

Rooftops with solar panels, rural households with a biogas plant in their backyard and wherever feasible wind mills will solve India's energy problem.

Such energy will be non-polluting as well as people will exercise direct decentralised control over their energy sources.

Schemes like non-formal education centres under Sarva Shiksha Abhiyan and concepts like para teachers should be wound up in favour of proper schools and regular teachers.

The idea of common school system along with the associated concept of neighbourhood school, a recommendation of Kothari Commission from way back in 1968, should be implemented as it has been done in most of developed countries.

Six per cent of the GDP must be allocated for education with 3 per cent for primary education alone.

Experience shows that any contractual employees will ultimately demand regularisation of their service anyway. So, why not begin by hiring good quailty regular staff.

There should be an affordable nationalised health care system for all.

Public transport must take precedence over private vehicles. Promotion of the automobile industry and strengthening of the highway network at the cost of railways in the name of infrastructure development is in the interest of private corporations.

Concerns of global warming must place a ceiling on the number of vehicles on road.

Road transportation has become very costly. There was a time when general class railway travel and state road transport travel used to cost about the same, but now bus travel has become twice as costly.

Common people have to use state road transport services, especially in areas where the railway does not have access. Thus, road transport must be subsidised to make it affordable for the common man.

Price rise must be checked immediately. Towards achieving this objective the practice of futures trading should be banned.

Big corporations, national or MNCs, must not be allowed entry into the retail sector, agriculture and agri-based employment generation sectors.

Politics of rich versus poor

The defence budget should be slashed and farmers, labourers and artisans ensured decent emoluments either through respectable MSPs or direct wages/salaries.

It is a pity that the class which places a ceiling on the daily wages of workers at Rs 100 per day and gives itself the Sixth Pay Commission is the one responsible for non-performance of virtually every welfare or development scheme. In any other situation salary hike would have been linked to performance. This betrays the arrogance of the ruling elites.

Presented to Finance Minister Pranab Mukherjee at a pre-budget consultation on January 21, 2010.