Remember, the money doesn't belong to you

CSR should be re-labelled ISR, Individual Social Responsibility, and each of us, as individuals ought to feel the need to give back, says Gurcharan Das. 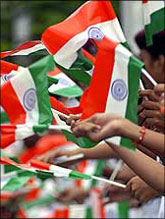 At a lunch in Delhi, I was confronted by a woman in a pink sari who lectured me on the importance of Corporate Social Responsibility (CSR). No one came to my rescue for 10 minutes, and I began to fret.

I wondered how to get away from her without causing offence. Then, I remembered an advice from a Bengali friend who had mentioned that in such situations a white lie was one's best ally. So, I glanced over my overbearing tormentor's shoulder as though someone had distracted me, and whispered loudly, "Coming, coming." to the imaginary person.

Then I lied brazenly to my oppressor, "Ah, what a pity, I am being dragged away," and I moved on, shaking my head reluctantly.

At first, I felt guilty for having lied, but soon I realised that I had done a good deed. The Mahabharata tells us about honest Kaushika, who was accosted by a gang of robbers who demanded to know where the witness to their crime was hiding. Kaushika unwisely told the truth and promptly got the witness killed.

To his surprise, Kaushika ended up in hell where he learnt that in this case his duty to ahimsa, "non-injury", trumped his duty to satya, "truth".

In the same spirit, I feel that that by lying, I had saved my tormentor from the pain of learning that she was a bore. I am convinced that white lies are the basis of civilisation.

Business persons are blamed for making us materialistic and consumerist, for promoting selfishness and greed. The market is reviled for debasing our taste through advertising, for making us buy things we do not need. Capitalism is denounced for alienating workers, for creating unjust inequalities, for corrupting the government and for ruining the environment.

It is true that in India our animus against capitalism has diminished in recent years as our economy has risen and we have tasted the fruits of reform. The fall of communism has also helped. While people have begun to believe that markets deliver greater prosperity; they do not think that capitalism is a moral system.

We still think that morality must somehow depend on religion. CSR is supposed to be the answer to alleviate the guilty conscience of business persons for having made a profit. CSR has a nice ring to it and it has been a buzz word for over a decade.

There are CSR departments in companies, CSR courses in business schools and CSR reporters in newspapers. And yet, why does something so worthy and high-minded leave me profoundly uneasy?

The premise of the lady in pink is that that a firm is obligated to "give something back" to those that make its success possible.

Her image of a firm is that of a free rider, unjustly enriching itself at the community's expense. Hence, good deeds are necessary to redeem firms. But why should firms be obliged to give something back when they give so much already? Rather than enslaving their employees, they pay them wages and benefits.

Rather than stealing from customers, they deliver goods and services that people value and pay for. Rather than riding freely on public services, they pay taxes.

According to my friend, Parth Shah, the CSR movement is trying to get the market to perform the function of the civil society or the state. Society consists of the state, the market and civil society; and the individual is variously a citizen (of a state), a customer (in the market) and a member of a community.

Alexis de Tocqueville celebrated this vibrant social sector in his wonderful travelogue, Democracy in America, and regarded it as the foundation of democracy.

Under the "fatal conceit of socialism" (in Hayek's words), the state began to usurp the functions performed by the market (the mercantilist state) and the civil society (the welfare state). The fall of communism has forced the state to withdraw from the domain of the market, and many countries, as a result, have experienced unprecedented prosperity in the past two decades.

The state still controls the functions of civil society and, hopefully, one day it too will gain freedom from the state.

"The social responsibility of business is to make a profit," said Milton Friedman, the Nobel Prize winner, in a famous article in The New York Times. He explained that in making a profit, a company creates thousands of jobs, both directly and indirectly through suppliers, distributors and retailers.

It imparts valuable skills to its employees. It pays millions in taxes. It improves the lives of millions of satisfied customers with its products and services. This is an enormous service to society. If some shareholders get rich along the way, does it really matter?

Companies should focus single-mindedly on their competence, provide better goods and services than their competitors and not get distracted by extraneous activity. A company's social responsibility is to make profits legally, not to harm nature and uphold the highest standards of governance.

I find that many executives and businessmen do not value what they do and hence are attracted to guilt allaying, often hypocritical PR programmes of corporate social responsibility.

Managers must first take pride in making a profit. Second, they must remember that the company's money belongs, not to them but, to shareholders. So, the only CSR activities that are justified are those that increase profits.

Individuals, however, should engage vigorously in philanthropy. It is immoral to spend the company's money but it is admirable to spend your own money on charity.

It is a theft against Reliance's shareholders if the company embarks on building hospitals, but it is admirable if Mukesh Ambani does. Hence, Tatas do their charity work through their trusts.

CSR should be re-labelled ISR, Individual Social Responsibility, and each of us, as individuals ought to feel the need to give back.