Car makers want stimulus to go on. Here's why

Car makers fear that when car prices go up and loans become expensive, running a car will also cost more. Thus a stimulus-pullback will act as the straw that broke the camel's back, says Bhupesh Bhandari. 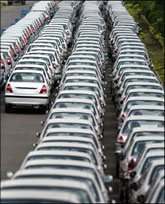 When heavens had started to fall towards the end of 2008, the government announced, in two tranches, a 4 percentage point cut in excise duty on cars.

The stimulus was intended to help car makers fight the dark forces of slowdown. Fears of joblessness, the crash in the stock markets and the credit crisis had made customers nervous.

A stimulus-induced fall in prices would, it was hoped, bring customers back to the showroom. The trick did work. By mid-2009, sales were back on track. Now that sales have hit an all-time high, there is a call to roll back the stimulus.

So, car makers these days can be found lobbying hard with the government not to discontinue the stimulus. Even if it is partially rolled back, the industry will begin to bleed, they have argued.

Every car maker worth his key ring has made innumerable statements to the media. The stimulus has not been rolled back in the United States and Europe; so, how can India do it?

The industry is still on the path to recovery; any adverse development is certain to derail it. The list is long.

But the voices that have emanated from the government do not hold much hope for car makers. Sectors that have bounced back do not require the stimulus anymore.

If sales of the last few months are anything to go by, the car industry is skating on thin ice. In January, most car makers had raised prices by less than 1 per cent; it did not impact sales at all. This has weakened their case further.

Several think tanks too are convinced that the time is right to pull the plug on the stimulus. This will help rein in the deficit in the government's finances, which is essential to controlling inflation, the logic is served.

Will the rollback really thwart the momentum in car sales? Almost three-fourths of the cars in the country are bought on instalments. (It was as high as 90 per cent in mid-2008, fell to 60 per cent in the financial meltdown, and rose again to the current level after state-owned banks were asked to fill the void created by private financiers.)

A 4 per cent increase could raise the price of a car that costs Rs 500,000 by Rs 20,000. If spread over 36 to 60 instalments, will this be large enough to hurt purchase decisions? This, mind you, is the price below which 80 per cent cars sell in India.

The car industry makes two points here. One, the actual impact is more than 4 per cent, because surcharges, central sales tax etc get added to it. There are various estimates of the final impact which range between 6 per cent and 7 per cent.

And two, any rise in price also means same instalments now get spread over a longer period of time. And this impacts consumer sentiment.

It also has something to do with the nature of the market. As many as 60 per cent buyers are multiple car owners, and only 40 per cent are now first-time buyers. In other words, for a majority, a new car is not a pressing need. It is this segment, car makers feel, which will respond negatively to any rise in prices.

So, the industry has said there should be other compensatory steps if the stimulus is withdrawn. Taxis more than 15 years old, it has suggested, could be taken off the road. This will trigger the demand for cars and make up for lost volumes if the excise duty concession is withdrawn.

When excise duty was raised in 1986, it has argued its case with numbers, car sales tanked almost overnight.

More than anything else, car makers feel the business environment is turning adverse. The stimulus rollback will make it worse.

Here's why. One, commodity prices are on the rise. China is firing on all cylinders. Metal prices will stay the northward course for some time to come. Two, interest rates are all set to harden in the next few months. All bankers have said that they expect monetary tightening in the days to come.

The Reserve Bank of India last month raised the cash reserve ratio, the proportion of the time deposits that banks need to keep with it, by 75 basis points. This will suck out liquidity of Rs 36,000 crore. Three, automobile fuel prices could rise in line with the recommendations of the Kirit Parikh Committee.

Parikh has called for freeing petrol and diesel prices of control. That may or may not happen, but most car makers feel that an increase in fuel prices cannot be postponed any longer.

Though crude oil prices touched a record high in 2008, prices were not raised, thanks to the 2009 general elections. There is only Bihar assembly elections this year.

So, the political fallout can be contained. Parikh, of course, has also said there should be a flat duty of Rs 80,000 on all diesel cars. Almost 30 per cent of the car market has gone diesel in the last few years.

The situation, car makers fear, is not far when car prices will go up, loans will become more expensive and running a car will also cost more. In this scenario, the stimulus pullback will act as the straw that broke the camel's back.

The hectic lobbying in the ministries of heavy industry and finance begin to make sense.