The fewer the number of central ministries that matter, the better the efficacy of India's reforms, writes A K Bhattacharya

In the early 1990s, Madhavrao Scindia was asked about his primary mission as the civil aviation minister. His brief reply was that he would like to put in place policies and adequately empowered regulatory institutions in a manner that he could wind up his ministry before the end of his tenure. 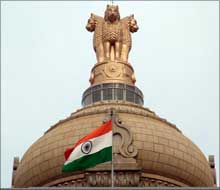 That, of course, did not happen. However, reformist ministers at the Centre continue to believe that reducing the role of central economic ministries is an unmistakable sign of economic reforms.

Take, for instance, Jairam Ramesh, the current environment and forest minister. Ramesh has been credited with the view that the role of his ministry in all environment-related clearances should be eliminated.

The central ministry that has become completely irrelevant is the ministry for industry. When did you last see a top-notch industrialist visit Udyog Bhavan, headquarters of the industry ministry, or wait outside the office of the industry minister? Let alone industrialists, not even industry lobbyists, liaison officers or industry chamber representatives are seen in the corridors of Udyog Bhavan these days.

This has been the principal outcome of the policy of delicensing a host of industries, a process that started in 1991. In the first few years after the initial round of delicensing, the industry ministry retained some administrative power as it had to issue a host of press notes clarifying doubts and outlining guidelines to enforce the new regime. Now even those press notes have become few and far between.

The industry ministry had tried very hard to retain under its control the Foreign Investment Promotion Board created by the PV Narasimha Rao government to accord special approvals to proposals for investment from foreign companies. But it lost that battle to the finance ministry. The secretariat for FIPB is still being held by the industry ministry, but the final power of recommending or clearing proposals now rests with the finance ministry.

Udyog Bhavan corridors would have looked even more desolate, if it had not also housed the commerce ministry. The need to formulate an annual foreign trade policy and the rising importance of the World Trade Organisation in global trade matters have ensured that members of trade and industry must continue to stay in touch with the commerce ministry.

Even in this respect, the commerce ministry could easily move over to the system of five-year foreign trade policies, as was originally envisaged. That would have ensured that exporters and importers would have fewer reasons to travel to Udyog Bhavan than they have to do now with annual trade policies.

Take a look at the ministries that are engaged with the infrastructure sector. The ministry of power now has less work to do after the creation of central- and state-level power regulators. The ministry of surface transport is less of a concern for trade and industry, as independent shipping tariff regulators and the setting up of several private-sector port facilities have helped reduce the role of a central ministry in resolving day-to-day shipping issues.

With private port terminals cornering an even larger share of India's international cargo traffic, the surface transport ministry will increasingly play the role of a facilitator.

That, however, is not the case with the railways ministry, which has refused to move ahead on proposals for corporatising various railway operations. Most new railway projects are proposed to be built under the umbrella of the Indian Railways, which is controlled and run by the railways ministry. The coal and mining ministries suffer from a similar problem.

In both the sectors, policies have not yet been put in place that would encourage gradual phasing out of the government's role. The civil aviation ministry has made some progress by bringing private players to the airport sector, and by setting up a regulatory regime for both airlines and airports. However, it appears, it has done little to distance itself from the day-to-day running of the state-owned airline.

How has the finance ministry fared in terms of reforms in the last two decades? It began very well with fiscal policy reforms in the first few years after 1991. But the progress after that initial burst has been slow. More disturbingly, the finance ministry has shown reluctance to usher in the much-needed liberalisation in the financial sector, even though basic groundwork to facilitate such reforms has been completed.

For instance, the country is still waiting for reforms in the insurance and pension sectors. It was the finance ministry that had set the reforms ball rolling in 1991. It is perhaps time that almost two decades later, the finance ministry should once again take the necessary steps to be seen in the forefront of the reforms movement at the start of a new decade.