Will China rule the world?

Thirty years ago, China had a tiny footprint on the global economy and little influence outside its borders, save for a few countries with which it had close political and military relationships. Today, the country is a remarkable economic power: The world's manufacturing workshop, its foremost financier, a leading investor across the globe from Africa to Latin America, and, increasingly, a major source of research and development. 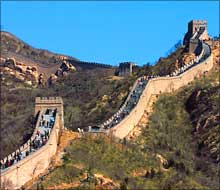 The Chinese government sits atop an astonishing level of foreign reserves - greater than $2 trillion. There is not a single business anywhere in the world that has not felt China's impact, either as a low-cost supplier, or more threateningly, as a formidable competitor.

China is still a poor country. Although average incomes have risen very rapidly in recent decades, they still stand at between one-seventh and one-eighth the levels in the US - lower than in Turkey or Colombia and not much higher than in El Salvador or Egypt. While coastal China and its major metropolises evince tremendous wealth, large swaths of western China remain mired in poverty. Nevertheless, China's economy is projected to surpass that of the US in size sometime in the next two decades.

Meanwhile, the US, the world's sole economic hyper-power until recently, remains a diminished giant. It stands humbled by its foreign-policy blunders and a massive financial crisis. Its credibility after the disastrous invasion of Iraq is at an all-time low, notwithstanding the global sympathy for President Barack Obama, and its economic model is in tatters. The once-almighty dollar totters at the mercy of China and the oil-rich states.

All of which raises the question of whether China will eventually replace the US as the world's hegemon, the global economy's rule setter and enforcer. In a fascinating new book, revealingly titled When China Rules the World, the British scholar and journalist Martin Jacques is unequivocal: If you think China will be integrated smoothly into a liberal, capitalist, and democratic world system, Jacques argues, you are in for a big surprise. Not only is China the next economic superpower, but the world order that it will construct will look very different from what we have had under American leadership.

Americans and Europeans blithely assume that China will become more like them as its economy develops and its population gets richer. This is a mirage, Jacques says. The Chinese and their government are wedded to a different conception of society and polity: Community-based rather than individualist, state-centric rather than liberal, authoritarian rather than democratic. China has 2,000 years of history as a distinct civilisation from which to draw strength. It will not simply fold under western values and institutions.

A world order centred on China will reflect Chinese values rather than western ones, Jacques argues. Beijing will overshadow New York, the renminbi will replace the dollar, Mandarin will take over from English, and schoolchildren around the world will learn about Zheng He's voyages of discovery along the Eastern coast of Africa rather than about Vasco de Gama or Christopher Columbus.

Gone will be the evangelism of markets and democracy. China is much less likely to interfere in the internal affairs of sovereign states. But, in return, it will demand that smaller, less powerful states explicitly recognise China's primacy (just as in the tributary systems of old).

Before any of this comes to pass, however, China will have to continue its rapid economic growth and maintain its social cohesion and political unity. None of this is guaranteed. Beneath China's powerful economic dynamo lie deep tensions, inequalities, and cleavages that could well derail a smooth progression to global hegemony. Throughout its long history, centrifugal forces have often pushed the country into disarray and disintegration.

China's stability hinges critically on its government's ability to deliver steady economic gains to the vast majority of the population. China is the only country in the world where anything less than 8 per cent growth year after year is believed to be dangerous because it would unleash social unrest. Most of the rest of the world only dreams about growth at that rate, which speaks volumes about the underlying fragility of the Chinese system.

The authoritarian nature of the political regime is at the core of this fragility. It allows only repression when the government faces protests and opposition outside the established channels.

The trouble is that it will become increasingly difficult for China to maintain the kind of growth that it has experienced in recent years. China's growth currently relies on an undervalued currency and a huge trade surplus. This is unsustainable, and sooner or later it will precipitate a major confrontation with the US (and Europe). There are no easy ways out of this dilemma. China will likely have to settle for lower growth.

If China surmounts these hurdles and does eventually become the world's predominant economic power, globalisation will, indeed, take on Chinese characteristics. Democracy and human rights will then likely lose their lustre as global norms. That is the bad news.

The good news is that a Chinese global order will display greater respect for national sovereignty and more tolerance for national diversity. There will be greater room for experimentation with different economic models.

The author is professor of Political Economy at Harvard University's John F Kennedy School of Government and is the first recipient of the Social Science Research Council's Albert O Hirschman Prize. His latest book is One Economics, Many Recipes: Globalisation, Institutions, and Economic Growth

Ash to star in Pink Panther 2