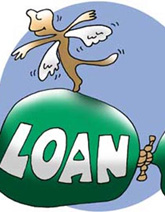 The Reserve Bank of India has strongly advised commercial banks to desist from offering low 'teaser' rates to new customers of housing loans.

The practice, started by the State Bank of India, has now been adopted by several banks as a competitive environment does not leave any option for players but to follow suit once one major player takes the lead.

Teaser rates enable a borrower to start off at a relatively lower interest rate, with the higher market-related rate kicking in after a couple of years or so. While this is an incentive with which customers can be attracted, the fact of the matter is that the effective rate of interest for home loans, which usually stretch for long periods, is not what a teaser rate offers but the reset rate which kicks in later.

The danger from this is easy to see. Customers who cannot afford to borrow at the longer term higher rate are nevertheless induced to take on a long-term commitment, only to rue their fate later.

This can only affect the quality of a bank's loan portfolio and this is what RBI is worried about.

Teaser rates are doubtful in themselves, but the experience of the recent global financial crisis makes them more so.

The US' sub-prime crisis, where defaults by large number of home mortgage owners led to the collapse of the housing bubble which in turn led to the overall financial crisis, was essentially a matter of those who could not afford to service a loan of a particular order for its entire life being lent funds.

And this was facilitated by the offer of teaser rates which were to be reset at a not-too-late a date, a provision that was a part of the fine print which many borrowers initially ignored.

With antecedents of this nature, teaser rates should not have been allowed in the first place. It is not clear why the regulator should have allowed this to happen even while sounding warnings that it is not a good thing. The banks' response, particularly that of SBI, is that it was awash with liquidity at the particular period when the practice was initiated and the stratagem has served its purpose.

But this still leaves open the issue of quality of assets which will not be known unless the higher reset rates kick in.

The teaser rates have also raised another issue -- existing borrowers who have been servicing their loans properly feel aggrieved at having to pay interest at rates higher than the teasers by over a hundred basis points and, naturally, do not like being discriminated against.

The banks' contention is that lowering existing customers' borrowing rates simply to bring them at par with current teaser rates will create asset-liability mismatch.

This may indeed be true and the best answer to the issue may be to end the practice of offering teaser rates and stop the perceived discrimination. It is all the more necessary to end the practice now as economic recovery is well on the way and the depressed housing market is beginning to see signs of stirring.

Slack demand, which was the reality earlier, may well be on its way out. Thus, it is time to withdraw the stimulus, particularly because it is not a sound practice in the first place.