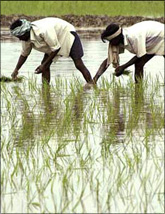 Even while the prices of agricultural commodities are ruling sky high, farmers are not benefiting from it. Being small producers, they face several inherent disadvantages which come in the way of realising better returns. Their share of what the consumer is paying for a commodity, therefore, remains woefully low.

Many of these problems can be taken care of through innovative business models which allow them to collectively reap the benefits of scale in both procuring the inputs and disposing of the produce. Though the concept of cooperatives is meant for achieving this objective, but unfortunately, it has not worked in India except in some sectors like milk and sugar.

Another novel concept, which was conceived and debated in the early 2000s but was almost forgotten subsequently, was that of primary producers' companies (PPCs), which were virtually the hybrids of cooperative societies and private limited companies without the undesirable features of both.

The Companies Act, 1956 was amended in 2002 to pave the way for the formation of such companies by the farmers and small producers even in other sectors.

Under this, a group of farmers can come together to form a PPC to provide services like purchase of inputs in bulk and sale of the pooled crop, custom-hiring of machinery, value-addition of the produce and the like.

The farmers will not lose their land and will continue to cultivate it. Each member of the PPC will have one vote regardless of his shareholding in the company. The shares of these PPCs will not be traded on stock exchanges and shall be transferable only to the members to ward off the danger of the PPCs being taken over by corporate barons.

Indeed, the credit for reviving this concept goes to President Pratibha Patil, who vouched for it at the Corporate Summit in New Delhi on December 21, 2009. She also asked the National Rainfed Area Authority (NRAA) and the corporate affairs ministry to initiate action on this front.

NRAA CEO JS Samra maintains that rainfed farmers being the poorest and the most disadvantaged of the lot, stand to gain from such companies. It will be better if the corporate sector can also be roped in and linked with the farmers, he feels.

With this end in view, the NRAA organised a workshop on innovative business model for the rainfed area development in collaboration with the Indian Institute of Corporate Affairs (IICA) in New Delhi last week.

Apart from discussing the PPC model, the workshop also explored the possibilities of bringing agro-based industries directly in contact with the farmers for mutually beneficial business but without dispossessing them of their land. There are some examples of successful linkages between industry and the farmers.

The tie-up between the sugarcane growers and sugar mills is one such among them. Such ties can also be fostered between the producers of several other crops which are grown in contiguous pockets, such as guar beans (cluster beans) in Rajasthan and adjoining states. However, some hurdles need to be removed to encourage this trend.

Though several states have amended their agricultural produce marketing committees Acts (APMC Acts), many of them have not gone far enough to make the new laws as progressive as the Centre wanted them to be. These laws also need to be made investment-friendly.

There are also examples of some successful PPCs, notably in the spices sector in the south. But, the trend has failed to catch on. One of the major reasons for this is the difficulty in raising finance. Banks are not too keen to lend to such companies as these do not own assets to serve as collateral. A few companies have managed to secure finance, but they've done that by holding the personal assets of their directors as collateral.

Considering the significance of resource availability for the growth of such companies, this aspect needs to be addressed without delay. One way of doing so can be to link the PPCs with the banks on the lines of rural self-help groups.

The National Bank for Agriculture and Rural Development (Nabard) can also come forward to make refinance available to the banks for lending to the PPCs.