Why Pawar must quit as agriculture minister 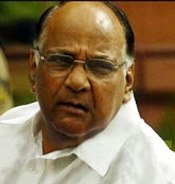 The Union Minister for Food, Civil Supplies and Agriculture, Sharad Pawar, who also doubled as president of the Board of Control for Cricket in India (BCCI) and has now become president of the International Cricket Council (ICC), has reportedly pleaded with Prime Minister Manmohan Singh that his ministerial burdens be reduced so that he can devote more of his time to his cricketing responsibilities.

The prime minister should request Mr Pawar to choose between government and cricket. Mr Pawar will not be any less popular in his home state of Maharashtra, or any less respected as an elder statesman or any less influential in Indian politics if he ceased to be a Union minister.

Indeed, his popularity may shoot up if he prefers to give up his ministerial perks and devotes the rest of his life to promoting cricket in India and around the world. He could make cricket an Olympian sport! He could get a bigger audience for Indian Premier League matches compared to World Cup soccer.

There are so many new frontiers to be crossed and Mr Pawar could become a global mentor for cricket. Why should he seek to keep his Cabinet berth, if he does not have the time and energy for it? Mr Pawar says he needs more hands in his ministry.

Mr Pawar has been widely criticised for keeping one foot in cricket and one eye on Maharashtra even as he had his other foot in the Union government and the other eye on the top job in Delhi.

No one can grudge a politician such political ambition. But when a minister says he wants less work in government to be able to devote more time to cricket, then one must ask whether it is not time to force a choice on him.

With just nine members in Parliament, and some of them willing to return to the parent Congress party, Mr Pawar demands too much generosity from the prime minister, who, in fact, has been among his limited circle of well-wishers in the Congress party.

Rather than push the prime minister into being even more generous, Mr Pawar should think of retiring from government, asking someone younger, perhaps his daughter, to take his place.

When Mr Pawar took charge of agriculture in 2004, the prime minister asked him to repeat in the rest of India the developmental miracle he had wrought in his home constituency of Baramati. Regretfully, he has failed on that score and Indian agriculture has suffered due to neglect.

The so-called Second Green Revolution is yet to take off, and food price inflation has hurt. Perhaps a change of hands at the food and agriculture ministry can help.