Bandhs: Acts of terror by another name 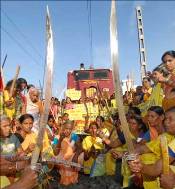 Courting arrest and disrupting normal life may have been an election-winning strategy decades ago, but today it smacks of a khap panchayat's approach, says K Subrahmanyam.

Media reports suggest that the Bharat Bandh ordered by most opposition political parties, cutting across ideological divides, cost the country several thousand crores of rupees in lost incomes and output, and contributed to lost daily wages for millions of poor.

This was the direct cost. Also, disruption of public transport and vandalisation of public property heaped suffering on millions. A person in need of medical treatment may have arrived late at a hospital, children missed school, and so on.

Why did so many stay at home, especially in states run by opposition party governments? Were they expressing solidarity, or just afraid to step out?

If Naxalites and extremists disrupt normal life, destroy public property, inject fear into people and make them retreat into their homes and away from public places, we call that terrorism. What is a state-sponsored bandh?

Opposition parties organising the bandh claimed that this was a peaceful protest to enforce accountability. Surely, if there is to be accountability in our democracy, elections in various states are not far away and that should give ample opportunity to test the popularity of the decision to decontrol the price of petrol and the proposal to decontrol diesel in future.

Politicians claim that since they are submitting themselves to the people's court (the elections), they should not be prevented from standing for elections till their final appeal is disposed of in criminal cases.

Is it not a derogation of democracy to let violence rule the streets in the name of protest, without waiting for the people to give their verdict on the decontrol of petrol?

People hold placards and march in single file or in double line without disrupting anyone else's business. That is peaceful protest and not use of intimidation of working establishments and hampering thousands of cars and buses in traffic snarls for hours, without availability of toilet facilities for those trapped close by. This is sadism at its worst.

I have taken part in the protest 'march of the million' in New York in favour of Nuclear Disarmament on a Sunday (a non-working day), with police providing escort and portable toilets on the streets. Indian political parties' 'peaceful' protests do not fall into this category.

Suppose those who do not want their work to be disrupted and the normal life of the city to be affected exercise their democratic right of protest at the same time. What will be the result?

Do they not have the right to the same type of 'peaceful protest' to keep shops open and transport running, and daily wage labourers to their livelihood?

What some of these political parties and leaders do not realise is the impact of such 'peaceful' stone-throwing and bus-burning protests on national security in this age of terrorism.

Since 1994, the United Nations General Assembly has repeatedly condemned terrorist acts using the following political description of terrorism: "Criminal acts intended or calculated to provoke a state of terror in the general public, a group of persons or particular persons for political purposes are in any circumstance unjustifiable, whatever the considerations of a political, philosophical, ideological, racial, ethnic, religious or any other nature that may be invoked to justify them."

It is the height of hypocrisy to claim that those who called the bandh and directed its enforcement did not anticipate the violence and that it was a spontaneous protest.

This has been happening for years and they all know very well what the consequences of a bandh are. It is bound to license anti-social and criminal elements to have freedom to run riot and to tie down the policemen.

Such a resort to terrorism for parochial political purposes indirectly legitimises other forms of terrorism, including the Naxal terrorism and that inspired from outside by religious extremists.

Violence is anti-democratic and has no place in a democracy. After having had the experience of years of most 'peaceful' protests turning into 'non-violent' stone-throwing and bus-burning, the politician has no excuse to plead that he is calling for a peaceful bandh.

Mahatma Gandhi called off the non-cooperation movement after the Chauri-Chaura violence. He always emphasised that ends did not justify the means. Let us look at the issue.

The government claims decontrol is necessary to stop the subsidising of petrol, which is used only by a minority of the popualtion. If the subsidy continues it will lead to a higher fiscal deficit, resulting in inflation, which affects everybody.

Whether one agrees with them or not, the government's arguments also emphasise the long-term interest of the aam aadmi.

Obviously, the UPA believes that in four years the impact of decontrol will wear off and the policy will benefit not only the country but also itself politically. In elections, those who were deprived of their daily livelihood will remember it more vividly than the petrol price hike, which does not impact them.

Should not the opposition parties reflect on this and dispute this with facts, figures and strategies in Parliament - which is to open in a few weeks - instead of resorting to this terroristic disruption?

The people are bound to come up with their answer. As it happened in May 2009, it may be different from the traditional street agitators' approach.

Courting arrest and disrupting Parliament and normal civil life may have been an election-winning strategy decades ago, but one wonders whether persisting with them in the second decade of the twenty-first century does not reflect the approach of a khap panchayat.

Handling the issue in the exploding media of today would have been a more cost-effective way of protest than the counter-productive legitimisation of terrorism at the expense of national security.