Mongolian herders and rural Indians, two seemingly disparate peoples, could provide valuable insights for other countries in Asia. Both groups have suffered from multiple crises and both are climbing their way out through innovative schemes that offer a hand up instead of a handout. 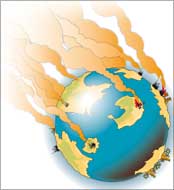 While countries in Asia are exploring ways to sustain the region's recovery from the recent economic crisis, they should not lose sight of the importance of investing in people and their welfare.

After all, spending on social protection can help people avoid falling into poverty traps. It increases consumption, which helps overall business outlook, and keeps growth up as well, thereby bringing positive change to a very large number of poor people.

Rapid growth is unquestionably necessary for substantial poverty reduction, but for this growth to be sustainable in the long run, it should be broad-based across sectors, and inclusive of the large part of the region's labour force.

It is essential to strike a balance between stimulating investment and consumption for growth, with meeting social sector needs of 900 million living in poverty across the region.

Fortunately, social protection schemes are multiplying in the region. In the late 1990s, South Korea introduced an Employment Insurance System with preventive measures for employment stabilisation and promotion.

Thailand introduced a universal 30 baht Health Insurance Scheme. Under this policy, the insured receive the same quality health services as offered by other health schemes. Over the years, Thailand has added nearly 14 million people to the system and achieved near-universal coverage without compromising access for those with prior coverage.

China and Vietnam are also rolling out extensive rural health insurance programmes. Since the food, fuel and financial crises, Indonesia adopted cash-transfer schemes for the poor. To ease fiscal and financial pressures, they slashed subsidies on fuel that, as ever, mainly benefitted the rich. The Philippines has expanded its conditional cash transfer programme.

However, India has adopted an ambitious social-protection scheme of a different kind called the Mahatma Gandhi National Rural Employment Guarantee Act. It is the first programme backed by national legislation to enhance livelihood security by providing at least 100 days of guaranteed wage employment in a year to every household whose adult members volunteer to do unskilled manual work.

If work cannot be found then compensation must be paid by the state. Till date 22 billion days of employment have been generated. Close to half of those employed were women and more than half were from marginalised groups.

Clearly, the benefits are reaching those for whom this programme was designed. This programme is backed by political will and the necessary budgetary resources, creating the world's largest 'cash for work' scheme.

By working an extra 100 days per year, there is more money for food for the family, for health care, and for people to be able to support themselves. Besides supporting the monitoring and management of this programme, UNDP has provided support to improve transparency, delivery of social services and access to financial services.

For instance, workers are able to receive wages at their doorstep through a fingerprinting device connected to a mobile phone. A simple mobile phone-based system also allows workers to access information about their accounts just by sending an SMS.

This programmme has acted as a safety net and lifeline for labourers and small and marginal farmers who would otherwise be adversely affected by jobs lost and reduced pay because of the economic crisis. It has successfully helped the very poor in India tide over the immediate impact of the global economic crisis.

This is one model that could be adapted to local needs in other countries, not just as an emergency relief measure, but as a scheme that can provide impetus to sustainable development.

It also has other benefits. The predominant focus of this employment programme is on natural resource regeneration with public works that are related to drought-proofing and irrigation - like planting trees, building irrigation canals and watersheds and de-silting ponds - thus boosting agriculture and food security.

In Mongolia, an initiative sponsored by the UNDP is offering hope and a future to thousands of herders who are trying to reboot their lives after the worst winter that anyone can remember, which killed more than 8.5 million goats, sheep, horses, camels, yaks and cows, leaving the herders without income.

Through a cash-for-work project, herders will earn a decent wage for removing and burying the carcasses. It is much-needed money at a time when debts are due and supplies are running low. This money will also take care of herders' immediate needs during this difficult period - for food, medicines, children's clothing and heating.

In the longer-term, the focus will be on introducing better herding practices. Families are being offered land to establish vegetable plots, and communities are exploring small-scale businesses such as dairies or wool processing.

These are small aims with a potentially transformative impact on the nomadic culture of Mongolia and its economy.

Policy makers in Asia are looking seriously at a range of social protection measures, including massive employment schemes that have worked in the region and elsewhere, to provide relief to those struggling to cope with the impacts of multiple crises.

For leaders in Asia the focus on growth and investment should not exclude exploration of job creation for the poor. Growth in the big economies is meaningless if millions of people in the region are left behind.