News
Business
Movies
Sports
Cricket
Get Ahead
Money Tips
Shopping
Sign in  |  Create a Rediffmail account
Rediff.com  » Business » Oil at $300 a barrel: Will it or won't it?

Whether that happens or not remains to be seen, but any case of negativity on oil should be the last till oil starts shock news, writes Mukul Pal.

I had earlier made a technical and time cycle case for crude oil's last dip to $60 before it heads to $300, suggesting the commodity cycle was 30 years long and considering commodities worldwide bottomed around 2000, a continued upside of commodities, including crude oil, till 2015 was a possibility. 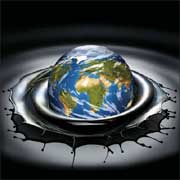 My observations were also in the context of a previous forecast, 'The oil rocket', published globally on May 12, 2008, both on print and the worldwide web. In that feature, I suggested that after crude oil falls to sub-$70 levels (from then extremes at $125), it should head above $300.

In May 2008, oil was so much on the market's mind that I got mails regarding oil hijacking retirement plans and top brokers soliciting me to buy call options. Oil then dropped to $39 and the second part of the forecast started to unfold from December 2008.

Now that the markets have awoken to the reality that pension plans get disrupted by sovereign risk rather than oil, brokers might have another strategy on the latter. In the new context, defending a May 2008 forecast is not easy. Still, for the non-believer, I will stick to plainspeak to address their queries.

The story that above $125 dollar a barrel, renewables get attractive, quoted $50 as the inflexion point a few months before. The question here is how you can quantify that $300 can't happen before renewables are embraced by the society?

Thinking green does not just need oil prices to go up; it needs an extreme pain when electricity bills start to matter. And, that may not happen till society pays multiple times of what it pays for oil today.

It might be only then that we, the investors, might really care about global warming and have a desire to save the world. It will be only then we might think of switching off the LED of our computer screen and teach our children about energy conservation.

Regarding the death of oil at $300, one should speak to Theodore Modis, futurologist. Assets don't die; they just become unpopular. How can you quantify when oil become unpopular? And, why can't it go to $300 before it starts to get unpopular?

Gold also moves up in greed and fear. How do you quantify what's driving gold, greed or fear? Behavioural finance suggests markets don't know how to subtract and add. A majority assigns narrow intervals when it comes to targets. So, how can we measure demand and supply?

The real debate is to think what if crude oil at $300 was probable. Natural gas has already started moving up and we see further upside. Regarding near-term oil, we are still expecting a dip till $60.

Whether that happens or not remains to be seen, but any case of negativity on oil should be the last till oil starts shock news. We also would like to mention that we are making an oil case here, a physical commodity. How it translates to equity related to oil is an inter-market story.

The author is co-founder and chief executive officer of Orpheus Capitals, a global alternative research firm