News
Business
Movies
Sports
Cricket
Get Ahead
Money Tips
Shopping
Sign in  |  Create a Rediffmail account
Rediff.com  » Business » Trusteeship and how it can spawn development

Trusteeship and how it can spawn development

If the endeavour that was flagged off in Udaipur flourishes and diverse energies combine to refine the lens of Trusteeship, 'growth' itself could be redefined. Then 'inclusion' will be an inherent rather than a separate goal, says Rajni Bakshi. 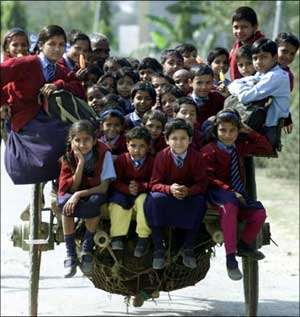 For about 60 years it has been assumed that the concept of Trusteeship went up in smoke with Mahatma Gandhi's funeral pyre. Few have mourned the loss of the principle on which Gandhi hoped to build a just, enlightened and free India.

Why bother with an idea that seems Utopian and threatens our material ambitions? Many people feel uncomfortable with Gandhi's suggestion that we are custodians or trustees, rather than 'owners', of the wealth registered in our name. After all, who would have time for a concept that induced feelings of guilt about the size of your asset portfolio, second car, a vacation home. . .

Yet, some of India's leading development workers and academics recently went into a huddle to ponder the future of trusteeship. Some years ago their deliberations could have been dismissed and shelved as being irrelevant to public policy and business. At present that's hard to do since both government and private sector are repeatedly talking about marrying 'growth' with 'inclusion' -- and insist that the couple can live happily ever after.

But is this aspiration limited to taking a 20% full jug and making it 80% full, asked Nachiket Mor, president of ICICI Foundation and a participant at the discussion on Trusteeship. What if we succeed in going to 80% full and then drop again because we have not done anything to alter the fundamental nature of problems, Mor added.

Or, as the veteran social activist Kishore Saint put it, how can we work for 'inclusion' or even Trusteeship without acknowledging the global 'civilizational crisis' -- fatally undermined eco-systems, teetering financial and governance institutions amid plummeting ethical standards.

'Trusteeship as Development', a gathering hosted by the Udaipur-based Seva Mandir, grappled with these dilemmas and threw up some startling surprises.

Firstly, virtually all 55 participants agreed that Trusteeship is not a burden or moral obligation that has to be fulfilled by denying yourself. Instead, Trusteeship is meaningful only if it is experienced as a form of freedom, an act of self-expression and self-fulfilment.

Once you see yourself as a trustee or a steward for what you hold, you can be free from the perpetual race for the accumulation of wealth and resources, said Rohini Nilekani, chairperson of the Bangalore-based Arghyam Foundation.

Secondly, few thought of Trusteeship as voluntary distribution of assets. That might be an outcome or by-product, said most participants. But the core elements of Trusteeship are cooperation, compassion, co-ownership, transparency, equity. These are qualities which can enable us to balance our individual interest with the larger common good.

Thirdly, just as these qualities are as old as the hills -- so are their counterparts: competition, cruelty, greed and grab.

And yet best practices that validate Trusteeship are treated as isolated exceptions, while greed and grab are considered to be dominant human traits.

Fourthly, benefiting people through government welfare programmes or private philanthropy is quite different from Trusteeship. The former can increase access to goods and services without in any way changing the game.

By contrast, a Trusteeship approach puts emphasis on reconfiguring power structures so that people feel both individually empowered and inclined to act in the common interest.

Fifthly, it follows that all three sectors -- government, private entrepreneurs and non-profit civil society initiatives -- would have to check whether their actions nurture or undermine the core elements of Trusteeship.

Fostering institutions and structures that allow more room for cooperation, compassion and co-ownership makes Trusteeship a dynamic strategy rather than a passive or abstract concept.

Naturally, much of the above can seem like wishful thinking. In many situations people, as they experience empowerment, tend to imitate their former oppressors, said Ajay Mehta, CEO of National Foundation for India. Are enough people inclined to see themselves as trustees of the common good, rather than as beneficiaries who must scramble to corner more and more for themselves?

Yes and no, is Seva Mandir's answer after 40 years in the field. Founded by the legendary educationist Mohan Sinha Mehta, Seva Mandir has done extensive work in many spheres including education, health, forest management and craft-based livelihood generation.

For instance, Seva Mandir's work on adult education helped to constructively engage village communities in development issues. As local leaders emerged through this process many of them got elected to panchayats and some did work to improve the quality of village life for all.

But most of these local leaders soon began to serve themselves and other vested interests.

"Through constructive work we can sculpt spaces where trusteeship can be exercised by all people, especially the most oppressed and poorest communities. But first you have to build trust within the village community," she said.

This is not easy. For example, most people now have little confidence in equal access to common resources like pastures, water, forests. So it seems more reliable to grab a piece for yourself than to commit time and energy to a community process that will spread the benefits equally.

And yet, Seva Mandir persisted regardless of many disappointments. Building upon lessons learnt in its first 30 years Seva Mandir worked with 189 village communities to restore and nurture various common resources.

Many individuals voluntarily gave up encroachments they had made and at present 70 per cent of these initiatives are going strong -- without any involvement from Seva Mandir staff.

"This changed the discourse" said Khetan. "Forest Protection Committees are now working to assert community claims rather than individual claims." There were similar successes in lowering absenteeism by school teachers.

"So things can change. Positive values do come to the fore," said Khetan. From this vantage point deepening of democracy means much more than making panchayats work more effectively in a managerial sense. It means nurturing certain positive values in society.

This view resonated with people from diverse backgrounds. Mor, who is highly respected for his combined work in the corporate world and social sector, went to the meeting hosted by Seva Mandir because he was keen to know how Trusteeship is currently understood and applied by the civil society organizations.

He came away enthused by the idea that Trusteeship has to be the goal, not a strategy or the means to an end.

But, Mor cautioned, it is equally important to tackle the counter view. Namely, that human nature is essentially combative and this trusteeship stuff is all mumbo-jumbo. "We can't just say that we will coexist with this view. We have to challenge this view, take it on. The notion that pragmatic people don't look at Utopian values is false," added Mor. "Everyone is searching. The question is -- where do we go from here?"

We could begin, said Peter D'Souza, by treating Trusteeship not just as a normative idea but as a practice that is supported by evidence. D'Souza, who heads the Indian Institute of Advanced Studies at Shimla, emphasized the need to document experiences of Trusteeship in different domains.

"We are on the threshold of something very exciting," said D'Souza. "More detailed knowledge will enable us to deploy the concept of Trusteeship as a new lens through to see reality," he added.

While sharing this excitement, Rohini Nilekani pointed out that much depends on how Trusteeship as freedom is actually made real. For one, she added, reconstructing the credibility of the state is vital. Similarly, there is a need to seriously include the corporate sector in this exploration.

So without actively seeking Gandhi the dialogue did come back to him. As Kishore Saint put it: "For Gandhiji Trusteeship meant ethical revitalization of samaj/society, and business-industry was seen as an integral part of samaj. Thus the emphasis on faith in hridaya-parivartan (change of heart) and consciousness -- from unfettered self-interest to need-based common good."

Yes, many 'corporate social responsibility' initiatives may look shallow when viewed with this lens. And yet, there is potential for lip-service to be transformed into something more substantial.

Above all, if the endeavour that was flagged off in Udaipur flourishes and diverse energies combine to refine the lens of Trusteeship, 'growth' itself could be redefined. Then 'inclusion' will be an inherent rather than a separate goal.

'We could not take our eyes off Rahul Gandhi'