A change that the Budget proposes to make to the tax laws could end up helping Indians who might have laundered their ill-gotten money, says M R Venkatesh. 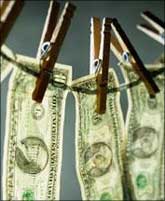 The Budget documents contain a statement on the tax revenues raised, but not realized, by the government of India. This provides us with the details of the unrealised dues on various taxes, viz. income tax, Excise duty, Customs duty, and service tax.

These are further categorised under amounts under disputes, that is, where the assessee has gone into an appeal and those not under any dispute.

To understand the implication of the said sum a reference to a bit of recent history is inevitable. In January 2007, the income tax department had first raided (controversial Pune businessman and stud farm owner) Hassan Ali Khan's properties across the country and seized documents that revealed that he had a sum of $8 billion deposited in the UBS AG bank, Zurich.

The department also found that Khan had not filed income tax returns since 1999. Later, the Enforcement Directorate started investigating as it was also a case of suspected money laundering. The ED has also been probing Khan and his associate, Kolkata-based businessman Kashinath Tapuriah, for violating the Foreign Exchange Management Act and laws against money laundering.

Subsequently, the income tax department had issued notices to Khan, alleging money laundering to the tune of billions of dollars, along with others, for suspected tax evasion. According to media reports, a show-cause notice was issued by the income tax department demanding Rs 40,000 crore (Rs 400 billion) -- on taxes alone -- against Hassan Ali Khan for not disclosing funds in several foreign banks, including the above-mentioned $8 billion in an account in UBS AG, Zurich.

Further his associates were also accused by the ED of having an account at Credit Suisse, and during 2001-05 two transactions worth $1.6 billion were made through it.

It is interesting to note that Hassan Ali Khan is out on a bail on a fake passport case that was filed against him. According to media reports of February 10, 2010, the Bombay High Court had dismissed the Maharashtra state government appeal to cancel this bail. The court also observed that the state itself was not interested in cancelling the bail granted to Hassan Ali Khan.

In this connection Justice D G Karnik said, "The state government is not interested in serving notice [to the accused and other parties] even after six months of filing an appeal." Justice Karnik also added that if the government was not keen on pursuing its own appeal, then the court had no reason to waste time on it.

All this indicates Khan's ability to move the right levers of power at the state level. It is also interesting to note his influence at the central level.

The tax -- due after adding the interest on belated payment of tax -- exceeds Rs 70,000 crore (Rs 700 billion), according to rough estimates.

If Khan's tax dues are taken along with those of his associate, Tapuriah, this amount could be a staggering Rs 100,000 crore (Rs 1 trillion). Yet, the entire tax dues of the government of India as per the Budget documents (both disputed and non-disputed) for all taxes as per the statement of tax revenues raised but not realised aggregates to only Rs 117,065 crore.

It is pertinent to note that the income tax dues from individuals (both disputed and undisputed) alone are a much lower sum of Rs 50,000 crore.

It would appear that someone in the finance ministry missed out Hassan Ali Khan and his associate. Of course, it could only even be an error.

However, there is another possibility. What if Hassan Ali and his associates had paid their taxes -- aggregating approximately Rs 100,000 crore -- by February 26, 2010 when the Budget was delivered?

Interestingly, The Week -- in its issue dated March 14, 2010 -- has carried an interview with Finance Minister Pranab Mukherjee on this subject. The finance minister asserts that the government seems to have recovered the tax dues from Hassan Ali Khan.

However, the revised estimates for 2009-10 do not reflect this. Rs 100,000 crore is too large a sum to be lost even in the government of India's Budget.

The Hassan Ali amendment to the IT Act

There is yet another dimension to this issue: the amendment to the Income Tax Act relating to the provisions of Settlement Commission. Under the existing provisions of Section 245A(b) of the Income Tax Act, the term 'case', in relation to which an application to the Settlement Commission can be made, excludes assessment proceedings arising from a search initiated under the Act.

Budget 2010-11 proposes to include proceedings for assessment resulting from search within the definition of a 'case' which can be admitted by the Settlement Commission.

A major beneficiary of this amendment would be Hassan Ali Khan who was hitherto excluded by law from approaching the Settlement Commission but now -- thanks to this amendment -- can do so.

How? The answer lies in para 124 of the Budget wherein the finance minister states: "Last year, amendments to the statute enabled the government to enter into tax treaties with specified territories besides sovereign states. We have commenced bilateral discussions to enhance the exchange of bank-related and other information to effectively track tax evasion and identify undisclosed assets of resident Indians lying abroad."

The heat to pursue illicit wealth parked in tax havens is rising globally. India too cannot remain a mute spectator as the international pressure mounts on tax havens to disclose the names of those who have their accounts in such places.

Consequently, India has to perform its share of the war dance on this subject. It is in this connection that the government seeks to pursue cases of wealth secreted abroad in proven cases of tax evasion. This is what is effectively stated in Para 124 of the Budget Speech.

Now that the finance minister has confirmed to The Week that the government has collected taxes from Hassan Ali, there is no case for the government to pursue this matter any further in other countries.

In case he has not yet paid the taxes (in case the finance minister is mistaken about this), the escape chutes (by amending the Income Tax Act pertaining to the Settlement Commission) are open for Khan.

What makes the Khan case interesting is that money was laundered from India using the hawala route. Experts say that a stud farm owner could not have been an originator of such a large income, indicating that it was not his money that was laundered.

At best he could well have been a conduit for several other Indians who could have used the Khan (read hawala) route to transfer their ill-gotten wealth abroad.

It would be interesting to find out just who did Khan launder money for. But with the Settlement Commission coming into effect, that is a moot question.

In a scenario where Khan's case could be effectively settled through the Settlement Commission, it must be noted that in the books of the government of India he could no longer be a tax defaulter. To that extent there is no locus standi for the government to pursue his case any further with any other country, much less in the case of tax havens.

And that in my opinion would help save the reputation of several prominent Indians who might have laundered their ill-gotten money through Khan.

By corollary, thus, this Budget ends up protecting the conmen of India instead of the common man of India.