News
Business
Movies
Sports
Cricket
Get Ahead
Money Tips
Shopping
Sign in  |  Create a Rediffmail account
Rediff.com  » Business » What food coupons can and cannot do

What food coupons can and cannot do

By Subir Roy
March 31, 2010 15:21 IST
Even if the government starts issuing vouchers which can be sold, a fairly early sunset will be written into them because of new technology clearly on the horizon , says Subir Roy. 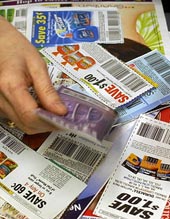 Vouchers or coupons have long been a favourite of hard headed liberal economists with a soft corner for the poor.

The idea is to deliver benefits directly to the poor, thereby eliminating unintended beneficiaries, while using the market mechanism; cut the costs of an inefficient public delivery system; and allow the poor some choice by letting them shop around with their benefit payments.

Thus school vouchers can let a parent send her child to a school of her choice and not to a poorly run state school. Unsurprisingly, public sector trade unions and leftists generally have opposed vouchers.

The government now seems to have bought into the idea. A beginning can be made with food vouchers which will skirt the inefficient and leaky public distribution system and vouchers to poor farmers to buy fertilisers may follow.

To make the system easy to run and vouchers popular, it has been suggested that beneficiaries be allowed to sell them. So someone with food vouchers should be able to sell some or all of them to buy what he likes. Whether the buyer should be able to use the coupon to only buy food is moot as policing such a restriction will be difficult.

How do the odds stack up for and against vouchers in today's India? Vouchers which can be sold should be extinguished as soon as possible -- carry an early expiry date. Otherwise there will be an ocean of vouchers circulating as a parallel currency system.

This brings us to the most important downside, the chance of counterfeiting of vouchers. To make that difficult they have to be designed with security features which will raise the cost of producing them. In a country where there has been a major forgery of stamped paper, the issue of counterfeiting, within the country or in its neighbourhood, should not be underestimated.

Beginning with food vouchers has been proposed presumably because that's where subsidy really counts and offers a route to quick acceptance and popularity.

But many of the problems in running a voucher system can be avoided if vouchers cannot be sold and are issued for one-time use, like paying school fees. Only a school will be able to redeem them. This will be like a pilot, allowing the idea to be tested and lowering the chances of abuse, before expanding the scope.

But while small means manageable, it also reduces scale and usefulness. For example, school vouchers will be no good for parents in remote areas where there is little choice but to send children to a state school. But such vouchers in urban and semi-urban areas, which have a fair share of the poor, can go a long way in putting on notice government schools whose lack of accountability has been hugely frustrating.

Vouchers to poor farmers to buy fertilisers can go a long way in helping them and not also rich farmers and fertiliser companies. Gold plating by the latter, which would mean Indian fertiliser factory managers are global leaders in running plants, has been long recognised as a way in which fertiliser producers manage to benefit from a scheme meant to help farmers.

Food subsidy is misused in two ways. One is when food with a fair price shop is sold by its owner in the open market at a higher price than what ration card holders would pay. Two, when someone who is ineligible to hold a 'below poverty line' (BPL) ration card as he falls in a higher income bracket, does so and benefits from the subsidy.

Vouchers can curb the scope of malpractice by ration shop owners but not by the ineligible holders of BPL cards.

The whole issue of properly targetting subsidies will get a boost when the unique identification authority starts issuing identification numbers and biometric cards follow.

One, this will greatly reduce the scope for misrepresentation. Ration shop owners who now routinely sell in the open market the rations not bought by some card holders will, in the UID era, find it more difficult to falsify records. Two, if food subsidy is loaded on to smart cards which are charged via point of sale devices at ration shops when a person buys rations, the scope of leakage will go down even further.

But UID numbers are expected to go with the holders of such IDs being able to open and operate no-frill bank accounts. It will then be possible to pay any and every kind of subsidy into these accounts and the need to issue vouchers which can be sold will disappear.

So even if the government starts issuing vouchers which can be sold, a fairly early sunset will be written into them because of new technology clearly on the horizon. But even then the problem of someone misrepresenting his income will remain.

Thus, vouchers have some but not all the answers to current ills.