Taxpayers' right to be taxed the least 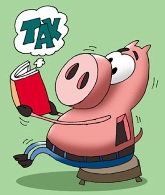 There are so many exemptions that one sometimes finds overlapping exemptions and two exemptions for the same item with slightly different nomenclature and conditions, says Sukumar Mukhopadhyay.

The thesis that the taxpayer has the right to be taxed the least amounts to saying that if he is faced with two exemptions, which are applicable to a particular commodity, the taxpayer can choose the one more beneficial to himself.

And he can claim it even if he has not claimed it at an initial stage. This finds support from one of latest  pronouncements of the Supreme Court in the case of Share Medical Care vs. Union of India - 2007(209) ELT321 (SC).

In this case, there were two types of exemptions under two different categories for some medical equipment imported. The importer originally claimed under one category but later claimed under another category, which was more beneficial for him.

Revenue held that once the taxpayer claimed under one category he couldn't change over to another category of exemption as an 'afterthought'.

The Supreme Court held that the fact that the taxpayer applied for one type of exemption originally does not mean that he cannot claim exemption, which is more beneficial to him at a later stage.

Even if an applicant does not claim benefit under a particular notification at the initial stage he is not barred, prohibited or stopped from claiming such exemption at a later stage, held the Court.

Even in the past the Supreme Court had given judgments which substantially conform to the same thesis. In the case of CCE vs. Indian Petro Chemicals  1997 (92) ELT13 (SC), the Supreme Court held that if two exemption notifications are applicable in a given case, the taxpayer can claim the more beneficial one.

In the case of HCL vs. CC  2001 (30) ELT 405 (SC), the Court held that where there are two exemptions that cover the goods, the assessee is entitled to the benefit of the exemption which gives him greater relief.

In the case of Unichem Laboratories Ltd vs. CCE  2002 (145) ELT502 (SC), the Supreme Court held that the benefit of a more beneficial exemption is available to the assessee and denying it to him is unfair.

The Court went to the extent of giving a stricture to Revenue thus, "There can be no doubt that the authorities functioning under the Act must, as are in duty bound, protect the interest of the Revenue by levying and collecting the duty in accordance with law  no less and also no more. It is no part of their duty to deprive an assesee of the benefit available to him in law with a view to augment the quantum of duty for the benefit of the Revenue.

They must act reasonably and fairly". In yet another income tax case of Kerala State Cooperative Marketing Federation Ltd. vs CIT  (1998) 5 SCC 48, the Supreme Court held that if income fell within any of the several heads of exemption,the taxpayer can avail of the more beneficial one.

Ignoring several judgements to the same effect which settles the law, senior advocates on behalf of Revenue appeared in such cases before the Supreme Court. It seems high fees are greater considerations than judicial precedents.

It has been a practice in the Customs Department for long years to allow such claim of exemption at a later stage right up to appeal and revision stage. I know it for certain from my experience over decades.

But that good legacy has been thrown asunder and Revenue has been fighting losing battle in the Supreme Court which explains so many judgments against revenue. It is high time the Central Board of Customs and Excise issues binding circular for its officers to follow the correct proposition.

'The next battle will be before the Supreme Court'