News
Business
Movies
Sports
Cricket
Get Ahead
Money Tips
Shopping
Sign in  |  Create a Rediffmail account
Rediff.com  » Business » Why mystery around the Budget is lost forever

Why mystery around the Budget is lost forever

The finance ministry's Budget Manual has ended the aura of secrecy around the preparation of the annual Budget, according to A K Bhattacharya.

Last month, the Union finance ministry released the Budget Manual. A 216-page document, it contains all the procedures and steps the government must follow while preparing the annual Budget. It is a unique document.

No other ministry has ever tried to bring out in the open the procedures it follows before finalising, for instance, the foreign trade policy or the central and state plans. 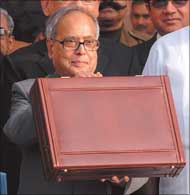 Finance ministry officials responsible for preparing the Budget Manual, therefore, should feel proud of what they have achieved.

That it took 63 years for the government to come out with a comprehensive document like this is also a comment on the way the bureaucracy functions in India. Why didn't anyone else in the government system in the past so many years think of producing as basic a document as this?

The answer may lie in the government's belief that the Budget procedures should remain shrouded in secrecy.

Thus, various Budget-related instructions and guidelines were available in the form of executive orders and circulars in different files in the Budget Division of North Block, the headquarters of the finance ministry. However, nobody made an effort to put them together.

The idea of bringing out all these circulars and procedures in a single document and then making that public is, therefore, truly revolutionary. The net result of the exercise is that the Budget process has become transparent. This has also made simpler and less onerous the task of new officers joining the Budget Division of the finance ministry or, for that matter, any other ministry connected with the formulation of the Budget.

In addition, the finance ministry has to get Parliamentary approval of the various demands for grants pertaining to the central ministries, the general discussion on the Budget and most importantly the Finance Bill, which contains all the legislative changes to give effect to the new tax rates and procedures.

The target for obtaining the president's assent to the Appropriation Bill and the Finance Bill is the first week of May, which marks the end of the annual Budget exercise.

In other words, the Budget exercise takes over seven months and three weeks in a year. The finance ministry may well ponder if it indeed needs such a long drawn-out schedule for the preparation of the annual Budget, now that tax rates have become more stable and the Budget is more about setting the government's expenditure priorities.

An interesting aspect of the Budget exercise is that about a week before the actual presentation, the finance ministry finalises the Finance Bill and sends it for printing.

In other words, the finance ministry concludes its deliberations on tax rate changes or modifications in the provisions of the tax policy about a week before the Budget becomes public. The finance minister can still make some changes in non-tax-related matters as he finalises his speech just three days prior to presenting the Budget.

On the day the Budget is presented, three other significant events take place. One, the prime minister gives his approval to the finance ministry's request that the Budget Summary be presented to the president. Two, the president recommends under Articles 112, 115 and 117 of the Constitution that the government may present its annual financial statement to Parliament. Three, the Cabinet meets and approves the Budget.

The surprise element in Budgets during the post-reforms era has seen a progressive decline, with tax rates remaining largely stable and fewer sector-specific exemptions or concessions.

Now, the Budget Manual has put an end to the mystique and aura of secrecy around the procedures for preparing the government's annual financial statement.

FDI in multi-brand retail won't get nod from FinMi