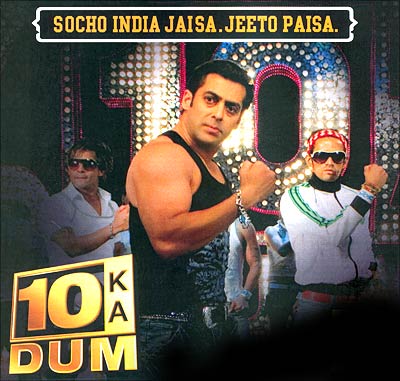 Salman Khan is going all out to promote his upcoming television show, 10 Ka Dum, on Sony Entertainment Television.

After aggressive promotion on television and hoardings, a music video has been launched. The music has been composed by Salman's favourite composers, Sajid and Wajid, who worked with the actor in Mujhse Shaadi Karoge and Partner. Wajid has also sung in the video. The lyrics have been penned by Jalees Sherwani.

Talking about the game show, Wajid says, "Salman's show is larger than life because Salmanbhai never does anything small. It will be fun and have lots of emotion. It will be a fully loaded show."

Four episodes of 10 Ka Dum have already been shot. "The way Salmanbhai is interacting with the participants is fabulous," Sajid says. "You can see that energy in the hoardings too. Have you ever seen such a hot milkman? 10 Ka Dum goes with Salman's image and we are very excited about it."

The music video will go on air today. 10 Ka Dum will premiere on television on June 6. It will be telecast every Friday and Saturday between 9 to 10 pm on Sony.

Ministers to get feedback from scheme beneficiaries