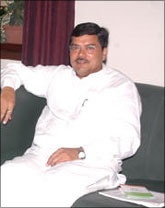 Positives like dalit music and literature should be promoted while reservations for the community can continue, Union Minister for Social Justice and Empowerment, Mukul Wasnik, tells Business Standard.

Are you satisfied with what industry has done so far on affirmative action for dalits?


In the last few years, a dialogue has been started and industry bodies like Assocham, Ficci and CII have adopted a code of conduct for their members for providing jobs to dalits. A group of officers headed by the secretary, Department of Industrial Policy and Promotion, is looking into the matter.

But dalit groups say all this has not translated into action on the ground.


These goals can be monitored and one level of the government is looking at them.

What do you personally feel about quotas for dalits in the private sector?


When these chambers adopt the steps that they have promised to, we will see how far they are able to go. As for me, I think it is a social obligation that the private sector has to fulfil. We will follow what they do. A large number of people aspire for a place in the private sector. I think it should be through persuasion. Industry has to adopt measures voluntarily.

You recently said you were disappointed with the manner in which industry had almost ignored the incentives the government provided it for giving jobs to the disabled.


I didn't say I was disappointed. A scheme was started to encourage employment of the disabled in the private sector. Under the scheme, employers' contribution to the Employees Provident Fund (EPF) and the Employees State Insurance Corporation (ESIC) will be paid by the government for the first three years. We expected that industry would come forward and a large number of people would get jobs.

But reports so far don't indicate that this scheme has been availed of in the manner we had expected. So, in the last session of Parliament, some questions were raised and I had a brief discussion with officials to find out the reasons.

Was it because of lack of awareness?


I don't think so. Former finance minister P Chidambaram had announced the scheme in the Budget and met a number of organisations. EPF and ESIC also publicised the scheme and wrote to their member companies.

So, awareness is very much there. The deprived sections have huge aspirations and want to get their rightful place in the society in every field.

But the Congress has been in power most of the time. So, don't you think it is too late in the day to address this now?


I don't think so. This government was the first to enter into a dialogue with the private sector. Close to 45 million families have got employment through the National Rural Employment Guarantee Scheme, which is largely benefiting SCs/STs.

There is criticism that the quota system has brought complacency among dalits and prevented excellence.


That is wrong. A large number of people have risen to the top due to reservations.

It is said that the same families have been benefiting from quotas. There is no plan to check this.


Reservations are aimed at giving a place to dalits not because of their economic backwardness but because they are victims of social stigma. So, the idea of a creamy layer is not acceptable. There is political empowerment through election of dalits in Parliament, Assembly, local bodies and panchayats, which leads to social and economic empowerment.

Due to quotas, dalits are able to send representatives to Parliament and other elected bodies and this has given them a political voice that can be heard. We still hear cases of atrocities against dalits. So, the stigma continues.

The cases continue to be large in number. What is the reason?


Two years ago, 35,000 cases were filed under the Prevention of Atrocities Act, of which 30,000 concerned SCs and 5,000 tribals. This is the state of affairs. This is because of discrimination. This is due to a mindset and we have to change this.

What has the government done to provide jobs for SCs?

Being called a dalit is still considered derogatory. Quotas harp on the stigma suffered by dalits. Why doesn't the government think of emphasising their positive legacies like dalit literature, music, folklore, even cuisine? There is hardly any programme for that. The private sector could contribute.


This is a good suggestion. We will discuss this and something should be worked out.

The government's policy for senior citizens does not address their need for cheap medicines and food. What are your plans?


We are in the process of reviewing existing policies and programmes. We will soon come out with a programme. We know it is urgently needed.

The earlier policy yielded an Act for senior citizens, which was notified by 22 states. Tribunals are being constituted and in Kerala they have even started registering cases.

Ten years have passed since the law and we will now review it. Today, if there are 75 million senior citizens, this figure will be 175 million by 2020. The category of people who are 80 and above is also increasing rapidly. Their needs will be different.

Do you propose to talk to the health ministry on the matter of subsidised medicines for conditions typical of the old? Many diseases remain undetected and there is no system of outreach to detect diseases in old among the poor.


We are reviewing our policy. We will take all suggestions . These things need to be addressed when we have a new policy.

You are in the process of overhauling the Disabilities Act. What is the purpose?


The final shape of the Act will be ready next week.We have tried to change the Disabilities Act, 1995, to match the UN Convention on Persons with Disabilities. Discussions are on and there will be a new Act soon.

You used to head the Youth Congress. What do you think about the changes that are being introduced by your successor, Rahul Gandhi.


I think if there is a system of nomination, it is bound to be questioned. But if a person is democratically elected, he is more powerful, which benefits the organisation. So, Rahul Gandhi has put the organisation in a democratic mould.

Now, decisions of elected leaders will be much more acceptable. Those holding offices in the Youth Congress will have more authority. It will attract people from all sections of society, especially in this period of knowledge explosion and the spread of the media.

The government is not implementing the NGO (non-government organisation) policy or facilitating their role in development.


Our ministry may do something for capacity-building of NGOs soon. We are preparing a capsule and will reach out to NGOs. Some support can help draw out the best in them.

Rahul Gandhi kicks off 'Mission UP 2012'