News
Business
Movies
Sports
Cricket
Get Ahead
Money Tips
Shopping
Sign in  |  Create a Rediffmail account
Rediff.com  » Business » 'This is a good time to move to market prices for petrol & diesel'

With the government dithering over raising auto fuel prices, Kirit S Parikh, who chaired a committee that recently submitted a report recommending market- and income-linked pricing for auto and cooking fuels respectively, says this is the opportune time to do so and suggests using taxation as a tool to moderate the rise. Excerpts: 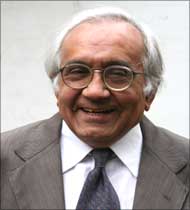 The integrated energy policy, framed by a committee under you, also went into the issue of petroleum pricing among other things and suggested moving to market pricing. The latest committee and similarly numerous other committees had a similar view but do you think there is a political will to implement market pricing?

The idea of political will has been created and picked up by the media. We are not running a dictatorship. It is a multi-party democracy with a coalition government, for which you have to carry broad consensus. See what has happened in the case of Bt brinjal. There is still a public voice that has to be carried through.

As far as the IEP is concerned, the committee's report came out in 2006, it was accepted by the Cabinet in 2008. The situation in the last few years has been extremely volatile. If you had not gone for free market prices in 2005 and 2006, it became extremely difficult to do it in 2007 and 2008, when oil prices were very high. I believe today is the opportune time to move to market prices. Prices can be adjusted now. The government can even temporarily cut taxes.

To move to free markets, if you need to adjust prices of petrol by Rs 6, and if you feel that it is possible to raise prices without too much public outcry by Rs 4, then cut duty by Rs 2. You can do the same thing for diesel, so that the immediate increase in price would be small.

Is there any difference between the IEP and the present committee's recommendations on petroleum pricing?

In IEP, it was suggested that prices be market-driven and competitive. It also said there should not be much difference between taxes on different fuels. If you have any other objective like environment, then you can have different taxes.

While this is a more rational thing to do, we have suggested a Rs 80,000 excise duty on diesel vehicles. If I raise the price of diesel, everybody pays a higher price - truckers, industry, railways, farmers - and that would increase the cost of transport. Whereas the price of diesel for owners of cars and SUVs is a personal cost. It is a question of acceptability. We are taxing petrol more because it is a tax on luxury. The same argument applies to diesel-driven passenger vehicles.

Automobile makers have questioned the flat rate of Rs 80,000 on diesel vehicles on the ground that small cars should not pay the same tax as luxury diesel cars. What are your views on this?

The government appears to be willing to accept the recommendations of the committee only partially. Will this yield any result?

We are not saying do it tomorrow. The report recommendations are in two parts. One deals with petrol and diesel. If the government accepts petrol and diesel prices as market-driven, it will be an important decision. Excise adjustment is a very good way of achieving this.

Consumption has to be checked. It is important to raise prices for efficiency in transportation. Whether you should tax diesel cars or not is a separate and independent issue. There is an anomaly that needs to be addressed.

Then, take our recommendations on the subsidy-sharing by upstream companies.We think we need a strong and viable upstream industry for our energy security. We have suggested that upstream companies should pay tax on only that portion of production that is from blocks allotted on nomination basis.

Why have you left out companies that have been allotted blocks under the New Exploration and Licensing Policy, and also pre-NELP since they also get the benefit of an increase in oil prices?

The NELP mechanism is different. For instance, Reliance Industries Ltd is allowed to write off expenses from its revenue and when expenses are covered, sharing begins. Sharing increases as the proportion of profit increases. If the price increases, RIL will write off its expenses earlier. The government starts getting a large share earlier. There is no question of government not getting a higher share in these blocks.

When the subsidy burden of upstream companies goes down, the government's share goes up. How do you think this can be addressed?

Everybody agrees that whatever subsidy the government wants to give on kerosene and LPG should ideally be given out of the government budget. The logical thing is to tell the government, either you raise the prices or give it from the Budget.

What would you suggest, bonds or direct subsidy?

Whether it is bonds or cash, they do not come on time and the whole mechanism does not work. Oil marketing companies end up borrowing in the short term and end up spending on interest rates. It would certainly impact OMCs' finances.

The monetisation of bonds is already happening. It is below the budget. Bonds are only window dressing. If you want healthy oil companies in the country and 80 per cent of your need is imported, there is no choice whatsoever but to pass on the price to oil companies. On those products for which the government does not want to transfer the burden, it should come out with a clear and transparent way of subsidising.

The committee has suggested eventual phasing out of subsidised price and instead giving direct subsidy either through vouchers or a smart card system that works on unique identification number. How feasible is this?

Personally, I feel food vouchers or petrol vouchers can work. But, people say there is always a danger of faking vouchers. If you have a UID system, then there will be a random number given to individuals but the catch will be in the fingerprint.

The idea is that a person can go to any shop, give his fingerprint and if he has a smart card, he can buy at market price, with the remaining amount being automatically transferred from the central government to that of the shopkeeper. Nobody else can transfer this money and leakages can be eliminated. Smart cards can be distributed in a transparent manner. The same thing can be done for LPG.

You have said that LPG is a merit good but you have not suggested anything to promote its use.

The Chaturvedi panel suggested six subsidised cylinders could be given every year. At the current level of Rs 285 a cylinder subsidy, a consumer will have to pay Rs 1,140 extra for four cylinders in a year which comes to Rs 100 extra if a family consumes 10 cylinders.

We have also recommended the same burden but in a simpler manner. The subsidy on LPG is very large. After our recommendations, there will still be Rs 185 a cylinder subsidy. If I have a smart card, I will give subsidy but there will be better targeting.

The committee has also suggested adequate regulatory oversight but we have a situation in which the government wants to curb the powers of the regulator by saying that pricing is a policy issue and the Petroleum and Natural Gas Regulatory Board should not decide it. What are your views?

Price should not be fixed by anybody. The government should also not be deciding prices. It is not a policy issue. Price should be decided by the market. We need to have a Competition Commission of India kind of regulation for the sector.

There should be no cartelisation or monopoly pricing. The regulator has a role to play. State-owned companies are using sarkari power to undercut private companies. That's wrong. The regulatory board should be looking at this issue and ensuring that a competitive market prevails. If there is market pricing, nobody will have monopoly power.