Report has mistakes, but glacier melting is real: Pachauri 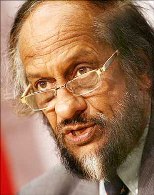 The chairman of the Intergovernmental Panel on Climate Change, R K Pachauri, tells Kalpana Jain that the glacier melting report was a mistake but that does not detract from the fact that glaciers are melting.

How big do you consider the goof-up on dates (of glaciers melting) and will it change the ongoing climate change talks?

We realised it was a mistake and stated that very clearly in a statement. I don't want to minimise the mistake itself. But in no way does it detract from reality - that there is widespread mass loss of glaciers.

We have said this clearly in our synthesis report, which is the last of the four documents we bring out as part of an assessment report. This error was not there in the synthesis report. But we had a very clear statement on climate change.

What is the synthesis report and how widely is it circulated?

The synthesis report is the last of the documents. It is the most widely-read report, meant for policy-makers. We have three working group reports - each of them about 3,000 pages. The synthesis report takes the essence of all these three reports and presents them in a manner that is readable for policy makers.

It is interesting that the synthesis report does not pick up this point, which seems to have emerged as an important point in the fourth assessment report.

I'll tell you why. That is because mention of disappearance by 2035 is something that IPCC, as a style, never promotes. All our future projections are exactly what they are supposed to be - projections. We provide a range. We provide a scenario. We never say something will happen by so and so date.

The environment minister, Jairam Ramesh, has called the contents of the IPCC report "voodoo science".

I would much rather not comment on it. He has been a friend of mine for over 30 years. He is a friend today. I hope he remains a friend.

The lead author of the Asia section of the report, Prof Murari Lal, said IPCC changed rules for the fourth assessment report to include non-peer-reviewed literature. Is that so?

That's not true. It wasn't the first time. It is there in the established procedures of IPCC that we can use non-peer-reviewed literature, what we call grey literature. It is there on our website. Where we use grey literature, we are required to closely check sources and verify the authenticity of our information. That's where the failure took place. That should never have happened.

What is the process of choosing authors?

Over 4,000 people are involved in an IPCC report. For the fourth assessment report, there were 450 authors, 800 contributing authors and 2,500 expert reviewers.

To choose authors, we write to governments and other organisations, such as research institutes. We get nominations. We get their CVs. The bureau of IPCC, which comprises 30 officials of IPCC, scrutinises them, matches the CVs and the structure of the report against authors. Every chapter has a group of lead authors. It's all done in a team. We are now in the process of selections for the fifth assessment report.

Will there be any change?

None. There is no reason to feel disappointed. We made excellent choices.

Chris Landsea, chief scientist at the National Hurricane Centre, withdrew from the fourth assessment report. Did he had ethical concerns?

There was a difference of opinion between him and another author. The impact of hurricanes cannot be measured. It is only an indirect analysis of the available data. Out of 450, only one withdrew. There was consensus among others, who felt he was underplaying the impact of global warming on hurricanes. It is a genuine case of difference of scientific opinion.

Let's talk about some conflict-of-interest cases. Environment awards to NHPC (National Hydroelectric Power Corporation), from which TERI was receiving money, was one such case.

We give these awards on the basis of specific projects. We get entries from a large number of companies. This was a very good project. We do due diligence. We send teams to verify claims. We have a distinguished jury. After the awards were given, it was brought to the attention of the jury that NHPC had done something undesirable in another location. There was nothing that required the withdrawal of the award.

What about receiving funding from NHPC?

We made the funding known to the jury. They had provided a chair in the TERI University. All universities work on endowments. It wasn't as though they were a tobacco company.

You have been on boards of ONGC and IOC, among others.

I am proud of my association with organisations such as ONGC and IOC. We have been working with them for years. ONGC uses technology on oil spills that TERI has developed. Microbes eat up the oil and die. There is no chemical leftover and it is inexpensive. ONGC wanted to use this on a large scale. Every institution does this. TERI is as much about working for the public as for the public sector. As a research institution, we use benefits of knowledge. If anything, we should get a pat on our back.

What about the allegation of you serving as an advisor for the climate industry?

I am only an advisor. There is one company in North America called GloriOil. We have a joint venture with it for using microbial technology. I get nothing from them. We are ensuring large-scale oil recoveries from wells that have been closed down. We have given them our technology but not charged anything.

Are you saying you are doing it for free?

Once they make their money, we will get our returns. I am proud of these associations if I can get a Deutsche Bank to move into clean technology. I feel proud that ONGC set up a trust for renewable energy. At IOC, I said it should become an energy company and not just an oil company. The skeptics want to continue with their lifestyle and ruin the environment. My conscience does not allow it. As Al Gore says, it is an inconvenient truth.

How Teri plans to commercialise its technologies