News
Business
Movies
Sports
Cricket
Get Ahead
Money Tips
Shopping
Sign in  |  Create a Rediffmail account
Rediff.com  » Business » 'India does not intend to take away someone else's job'

'India does not intend to take away someone else's job' 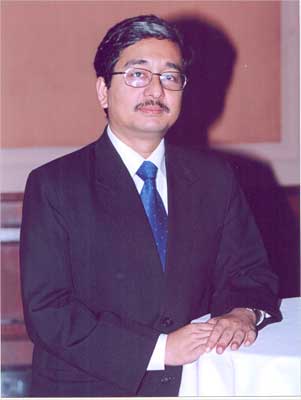 Ambarish Dasgupta is a worried man. As the executive director of PricewaterhouseCoopers, he and his colleagues have their hands full working out plans to counter the present economic crisis.

Consultancy being their prime business, the road ahead seems a tough one for Dasgupta's company.

''These are difficult times and every business decision has to be weighed with extreme caution," he told Assistant Managing Editor Indrani Roy Mitra during an informal chat.

Dasgupta is a partner/director and a member of the leadership team of PwC, India with about 20 years of experience in IT and advisory and over 15 years in managing large IT-enabled reengineering projects in private, public, semi-government and government organisations. Excerpts from the interview:

Yes, of course.  An economic slump has hit the entire world and we in India cannot expect to be spared.

Big corporations across the world are busy doing a quick rethink about the recruitment process and some have even put a freeze on hiring for a while.

Has slowdown also led to retrenchment?

It has not so much in India but in Europe and the US it is a big issue. This meltdown will lead to more job cuts in future, may be also in India.

The logic is simple - every organisation now wants to cut cost and retrenchment definitely proves to be the easiest option.

How has this slowdown affected your company?

As of now, no decision has been taken about hiring or retrenchment in our company. But talks are on. We are planning campus hiring anew, working round the clock to achieve more cost efficiency and increase production.

We are into consultancy business, which constitutes discretionary spending. Whenever there is a financial crisis, we are the first ones to be hit.

US President-elect Barack Obama's recent statement about outsourcing has ruffled a few feathers...

I think this issue is being blown out of proportion. Let's get one thing clear -- India does not intend to take away someone else's job.

Second, the US President-elect, while drawing up an economic plan has to take into consideration big corporate houses' opinions. And the latter would definitely advise him to work out a win-win formula as far as outsourcing is concerned.

Barack Obama's priority would be stabilising his country's economy by cutting cost and he would not be able to achieve that without outsourcing.

Is the growth rate of India in general and IT in particular going to slow down as a direct offshoot of the global crisis?

I think the growth rate would slow down qualitatively to some extent but the quantitative decrease may not be as alarming as is being predicted. In fact, I think we should make some positive use of this slump.

We must work out strategies to position our products in the global markets well and must develop sound politico-economic ties with other countries.

The onus now rests on our leaders and industrialists to turn the tide of slowdown in India's favour.

What is your prediction for India's growth in the next two years?

I foresee a similar pattern of growth as India has witnessed in the last three to four years.

Do you think there is a lesson to learn from the US economic crisis?

Of course. What happened in the US should be an eye-opener for every Indian. India's risk management system needs to be upgraded, its norms reinforced.

There is a sound credit management system prevalent in India but we need to strengthen that to prevent US-like financial disaster.

Also, a strong monitoring of India's financial institutions is the order of the day.

Recently industrialisation in West Bengal received a severe jolt when the Tatas withdrew their Nano project. Don't you think it's going to have an impact on the state's growth?

The Nano episode is too big to be ignored. However, now with the effects of economic slump trickling in, all Indian states are almost at par.

Therefore, the West Bengal government needs to pull up its socks and do a bit of self-introspection to nurse the wound the Nano incident has caused.

What should be done to prevent such an event from getting repeated?

I feel the state government should expedite a few projects that are on its anvil and launch them right away to create a positive impact on the people as well as on the investors.

It should also think of creating a non-partisan panel consisting of intellectuals and celebrities that can act as the mediator between the state government and the people. Such a body could prevent any miscommunication whatsoever for future
projects.

What are your views on India shining?

Is India shining? I am not too sure.

While India has made a lot of progress in certain fields - science and information technology, it has miles to go in dealing with grave issues like poverty, illiteracy, pitiable infrastructure and poor health management.

Science and IT are essential for a country's growth but it can never attain self-sufficiency unless the basic needs of its people are fully catered to.

Image: Ambarish Dasgupta is a partner/director and a member of the leadership team of PricewaterhouseCoopers