India had a dream run of five years during 2003-08 as the GDP growth averaged nearly 9 per cent annually for five years, the best ever run over five years!

Some of us had argued that the tightening was going too far and over reacting to inflationary fears, which largely arose from global factors. The policy makers and none of us had foreseen the external shock arising from the global crisis, which began with the financial meltdown in the US. The interesting question therefore is: what would India's growth rate have been in response to the policy measures without the global crisis, compared to what it is likely to be in the context of the ongoing global crisis.

ICRIER has been forecasting India's GDP growth rate with the use of  'Leading Indicators'.

Leading economic indicators are variables that are considered to have significant influence on the future level of economic activity in the country. These indicators give advance signals about the likely growth rate and in this case we are able to use this to forecast GDP growth five quarters ahead of the value of leading indicators. The predictive quality of LEIs has earned them their name of being 'leading' indicators. It had predicted a growth of GDP at 9.2 per cent for 2007-08 in November 2007, while most agencies had predicted a lower growth rate of 8.5 per cent or below that year, as against the actual growth rate of 9 per cent. Then again, ICRIER was first in predicting a growth rate (before the crisis erupted) of 7.8 per cent for 2008-09 in July this year, an estimate that thereafter was adopted by others, including both the RBI and the finance minister.

A composite index for the leading economic indicators has been constructed for the period 1997-2008 with the quarterly series of growth of these variables (except for the real rate of interest where the level, and not the growth, has been used) using the 'principal component index' (PCI) method.

The PCI method assigns weights to each component leading indicator by the iteration process based on its contribution to total variation in the composite index.

Leading indicators could predict future growth based on what has already happened in the past but cannot capture the impact of sudden external shocks which may have an immediate impact on the economy.

The leading economic indicator index (LEI) with a 5-quarter lag and the shock represented by a dummy variable (equal to 1 with shock and 0 without) are used to forecast India's future GDP growth.

The growth equation builds in the previous shocks of the dotcom bust and the agricultural failure and its estimates track the actual GDP performance very closely as shown in the chart below. For projecting the GDP growth for 2008-09 and the next year, the LEI index incorporates the current expected shock of the global financial meltdown.

The estimated equation for GDP growth forecast is satisfactory with adjusted R-square value of 0.58 and t-values for the regression co-efficients of 3.24 for LEI (-5) and -5.95 for the shock variable, which are significant at 99 per cent level.

The GDP forecast for 2008-09 and for the first half of 2009-10 is tabulated (see chart), alternatively with the shock and without the shock.

As the chart shows, India would have grown 7.5 per cent this year (a slowdown from 9 per cent in 2007-08), had the global crisis not occurred. 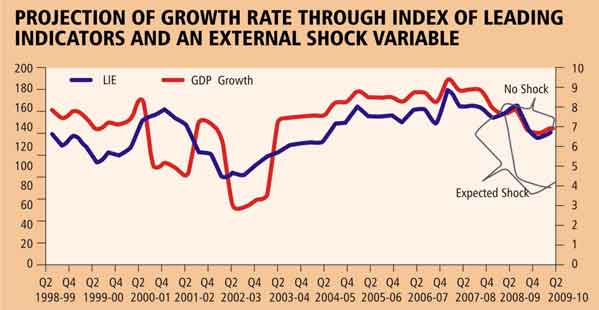 The global crisis is likely to bring India's growth rate to below 6 per cent in 2008-09. With the first half GDP growth rate already known, this implies a sharp slowdown in the next two quarters.

In the first half of next year, the economy would have grown below 7 per cent in the absence of the external crisis. The global crisis may reduce Indian growth rate to as low as less than 4 per cent in 2009-10.

(However, we have not calibrated the intensity of the different shocks and the impact on growth is treated similar far all shocks. If the current shock is more serious than the previous ones, the growth may fall even further.)

The implications are significant. For starters, the Eleventh Five Year Plan targets should be recalibrated immediately if that exercise is to remain credible.

We should prepare the people for slowdown in employment generation and plan for counter cyclical measures urgently.
This should imply an immediate reduction in interest rates to bring down the cost of capital and a quick and thorough review of government procedures that vitiate the investment environment and hike up transactions costs.

Rather than throw more money at the problem, it is important to identify infrastructure projects like the highway programme where some additional resources but a lot of attention to implementation and execution can generate additional capacities and help raise growth. But some counter cyclical fiscal measures will surely have to be taken.

Perhaps one to be considered seriously is a cut in the central excise duties, as this will lower prices and bring forth new demand.  This will give greater strength to finance minister's demand for industrialists to reduce prices.

Policy makers have to deploy all tools at their command to boost business sentiment and consumer confidence which are both badly shaken. It is an extraordinary situation seeking extraordinary measures.

The authors are Director & Chief Executive, Senior Consultant and Consultant at ICRIER, respectively. The views expressed here are personal and not necessarily those of the organisation where they work.

Exam results are not the end of life: Modi to students