Why more economic pain awaits US

The lifeline of the United States economy is facing a serious crisis of confidence. By lifeline, we mean the American consumers.

Businesses in the US have, for a last couple of decades and more, have taken American consumers for granted and considered them to be recession-proof. So far US consumers have also obliged them. But not any longer. Their confidence seems to have been substantially scythed and maybe permanently scarred.

Wounded by the financial crisis, US consumer confidence plunged in October, reaching an all-time low, as was reported by the Conference Board recently. The October consumer confidence index plummeted to 38 from an upwardly revised September reading of 61.4 and much lower than the market expectation.

The plunge by 23.4 points is the third largest fall in the history of the series and is the lowest ever recorded. 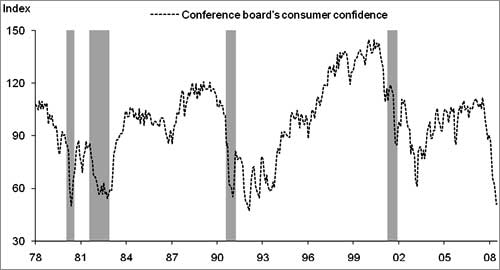 Source: The Conference Board

In assessing current conditions, consumers rated the labour market and business conditions much less favourably, suggesting that the fourth quarter is off to a weaker start than the third quarter. Looking ahead, consumers are extremely pessimistic and a significantly larger proportion than last month foresees business and labour market conditions worsening.

Their earnings outlook, as well as inflation outlook, is also more pessimistic and this news does not bode well for retailers who are already bracing for what is shaping up to be a very challenging holiday season.

In any case, retail sales have fallen for the last three months. This is the first time sales have fallen in such a manner since the record-keeping began. They are falling at an annual rate of 2 per cent, which is unprecedented. 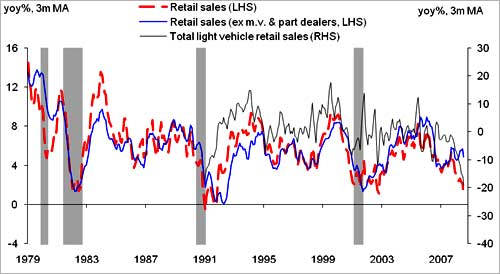 Auto sales are down, virtually in a freefall, with many auto company sales down more than 30 per cent. One of the behemoths of the global heavy trucking industry, Volvo Trucks, has reported a truly shocking decline in sales for the third quarter of this year. Volvo claims a 99.7 per cent reduction in demand compared to the same period a year ago. That means orders went from 41,970 trucks in the third quarter of 2007 to just 115 in the third quarter of 2008. No, that's not a typo, one hundred fifteen trucks on order across Europe. Global sales for Volvo have declined 55 per cent.

Tighter credit standards are forcing many car buyers to put down more cash up front to get a loan. The average down payment last month was $3,108, up 42 per cent from $2,194 in the same month two years ago, Edmunds.com reports. That's the highest average down payment since the car-buying research site began tracking the number in 2002.

And it may get worse. GMAC, the financing arm of GM, has announced it will not lend to anyone whose credit score is not 700 or more. And not many Americans qualify. As of March 2008, Experian gave a national average credit score of 692. That means, for a large section of the consumer marketplace, cheap auto financing is a thing of the past, unless auto companies underwrite loans with guarantees.

And this is not restricted to auto loans alone. Indeed, the sub-prime crisis has taken its toll on the credit worthiness of the average American. With a record number of loans being defaulted, lenders informally raised the lowest limit on what was considered a low-risk borrower. Whereas 680 was formerly a good enough score for someone to get a good interest rate, the score was raised to 720 in 2008. So, with a score of 692, the average American in 2008 is considered a sub-prime borrower.

Falling consumer and retail sales are not surprising, given the fact that almost one million jobs have been lost in the last 12 months, bringing unemployment to 6.1 per cent. It is expected that the rate can fall to 8 per cent and even beyond. This suggests that at least another million jobs will be lost this cycle. 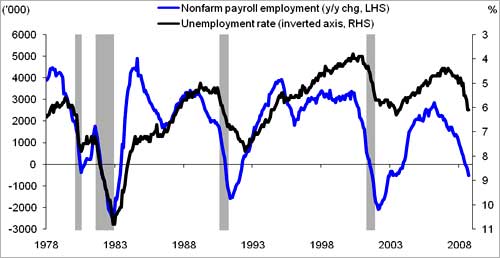 And, the effects are clearly visible through the delinquency rates. 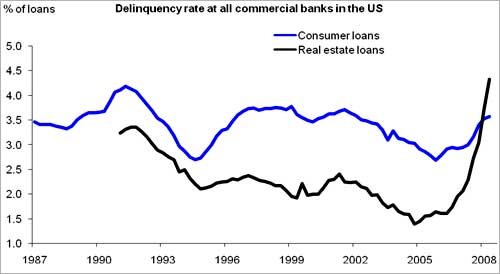 The delinquency rate on auto loans is 3.8 per cent, up from 2.9 per cent two years ago. Credit card delinquencies are 4.8 per cent, rising from 4 per cent. Not surprisingly, credit card companies are cutting credit lines and raising interest rates to try and stem the bleeding.

Consumer credit in general is up to 5 per cent delinquent, more than two-thirds higher than two years ago. Mortgage delinquencies have doubled from 2.5 per cent to a current 5 per cent. Clearly the US consumers are feeling the heat.

Not surprisingly, mortgage applications are falling off as can be seen from the chart below.

With the sub-prime lending market disappearing, new mortgage application is down substantially. What is even more important is to note the fall-off in applications for re-financing. As per the latest available data, the downward drift continues unabated.

This was the source of mortgage equity withdrawals, which fueled consumer-spending growth even in the face of the last recession.

As the US house prices started moving north from the late 90s, the US home owners routinely extracted (to meet their spending requirement) some portion of the equity that was created as the price of home soared. This is called Mortgage Equity Withdrawal (MEW).

Post the 2000 stock market bubble, such withdrawals assumed humungous proportions and this, in itself, propped up the gross domestic product growth. As can be seen from the chart below, the real GDP growth of the US economy would have been far less with the MEW.

Source: Greenspan's Bubbles - The Age of Ignorance at the Federal Reserve, William A Fleckenstein with Frederick Sheehan

Interestingly, in both 2001 and 2002, the US economy continued to grow on an annual basis (the 'technical' recession was just a few quarters). Evidently, this growth was entirely due to MEWs. In fact, MEWs contributed over 3 per cent to GDP growth in 2004 and 2005, and 2 per cent in 2006. Without US homeowners using their homes like an ATM, the economy would have been very sluggish.

Almost 20 per cent of US mortgage borrowers owed more on their loans in the third quarter than their house was worth as foreclosures depressed prices and the economy weakened. More than 7.5 million properties already have negative equity and another 2.1 million will follow should home prices decline another 5 per cent.

What does the current situation look like? If the numbers calculated by James Kennedy are to be believed, the engine of US GDP growth has essentially been turned off. Between 2004 and 2006 the annual MEW was around $700 billion, each of which added substantially to the GDP growth.

In 2007, it was around $471 billion. However, with MEW adding to their debts, the over leveraged US consumers marched ahead nonchalantly, as did the economy, till the bubble burst. This year, things have slowed down considerably as the second quarter of 2008 saw an anemic $9.5 billion of MEW. Clearly we are looking at a substantial reduction in MEW this year. 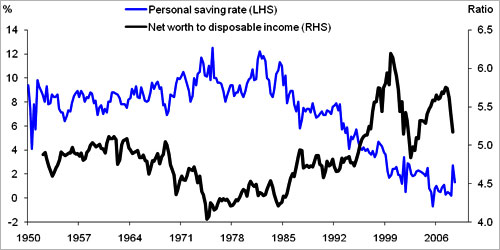 As can be seen from the chart above, ever since the baby boomer generation entered the job market (around 80s), there has been a clear trend toward reduced saving. This behaviour was exacerbated by the positive wealth effect. As a result, the average US household went neck deep in debt as they went on a consumption binge.

Now the past is coming back to haunt the super-consumers located in the US. With their wealth melting and job losses being the order of the day, they are perforce cutting down on consumption.

Add to this, stricter credit norms and the fact that the credit scores of average US consumers declining (remember, at current norms, average US household is a sub-prime borrower) and the impact on consumption (a drastic decline in Personal Consumption Expenditure or PCE) is visible. 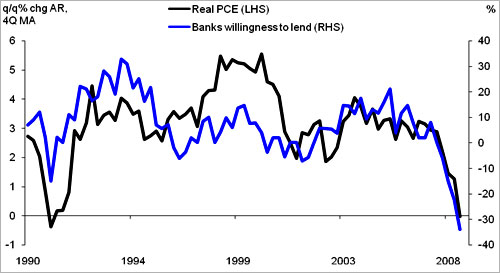 Going forward, we expect further decline in US domestic consumption, as -- just like the US corporations -- the US consumers would need to deleverage. Not only because of job-loss, but also because the consumer psychology has been badly dented. In a recently released CNN/Opinion Research Corp poll, nearly six out of ten Americans believed another economic depression is likely.

What is also important to note is that the baby boomer population of 76 million will begin to retire in 2008 and 10,000 people will join their ranks everyday for the next two decades. The generation that couldn't care less for savings is seeing its wealth dissipate in front of its eyes.

Rising home prices and increasing stock prices made many consumers feel comfortable that their retirement future was assured. Now, that feeling has been crushed. Home values are not likely to bounce back for a very long time. Nor are the stocks going to give spectacular return in foreseeable future.

As their retirement wealth gets impacted drastically, we feel that the virtues of savings will come to the forefront. Now, while it is a good thing for an individual to save money, it is not good for the economy as a whole, at least in terms of consumer spending and GDP growth.

Hence there will be a double whammy for the engine of US economic growth, viz falling consumer demand (aided by stricter lending norm) and a discernible shift from current consumption to future saving. This, we feel, will not only lead to a substantial contraction of the US economy next year, even the recovery process would be slower.