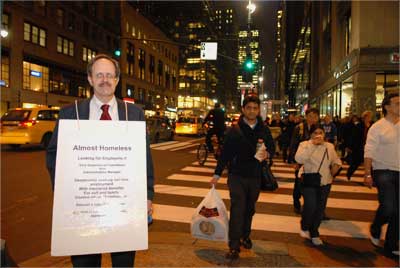 The worst-ever financial crisis to have ravaged the United States since the Great Depression of 1930 has taken a heavy toll on the world's largest economy.

The meltdown has led to shock waves across the world, with economy after economy gasping for breath to survive this financial tsunami.

Meanwhile, thousands of jobs the world over have been lost, and some people believe that the worst may not yet be over.

One such laid-off employee is Paul W Nawrocki (see photo). Nawrocki hangs a poster around his neck -- stating that he is a very experienced operations and administration manager and is desperately seeking full-time employment -- and stands outside the Grand Central Station, 42nd Street New York on November 8, 2008.

He is giving out his resume to anyone who cares to show interest in his skills.

Salaried people across the globe are worried with hundreds of companies giants laying off their staff in big numbers in the wake of the economic upheaval.