News
Business
Movies
Sports
Cricket
Get Ahead
Money Tips
Shopping
Sign in  |  Create a Rediffmail account
Rediff.com  » Business » 'The more you are globalised, the more you will be affected'

Well known economist U Sankar (former director of the Madras School of Economics) now works an honorary professor at the same institution.

In this interview to contributing mananging editor Shobha Warrier he speaks about the current global economic crisis and its impact on India. 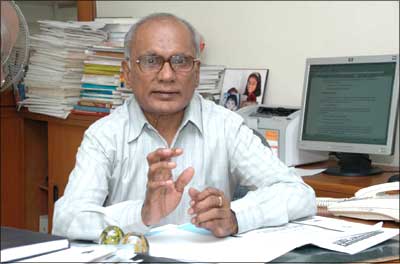 Last year itself we knew the sub- prime crisis in the US would spread to other countries but the intensity of the crisis was felt only in the last few months.

I would blame the investment bankers for the crisis. Also, the US government for the poor monitoring of the market situation. The sub-prime loans and the mortgages were not fully backed by the assets. Financial engineering methods they used to issue new securities backed by the mortgages were sold to many people including foreign countries. So, all the countries that invested on those bonds including China were affected when the boom collapsed and the assets value fell when the problem of repayment arose.

In the case of India, the volatility in the exchange rate happened because we used to attract a lot of foreign capital inflows. That was why the Sensex surged by almost 100 per cent in the last one year. The capital inflows and lower rate of inflation resulted in the appreciation of the rupee. Now, exactly the opposite of all this is happening; capital outflow is common with at least $10 billion going out every month, rupee is devalued and inflation is high.

Reserve Bank of India was concerned only about inflation till two months back. They didn't bother too much about the exchange rate or the effect on the real economy.

The immediate inpact of the crisis will be on exports. Exports will fall badly because of the recession in the US and other European countries. Imports will be costly because of the rupee depreciation. Most importantly, the confidence of the investors will be very weak. Now, they are comparing this crisis to the Great Depression of the 1929. They believe that the recession may continue for a year or two.

In India, export oriented industries like textiles, diamonds and jewellery will be affected immediately, production will be cut, employment will come down. Import dependant sectors also will be affected adversely because of the devaluation of rupee. This will continue for a year or so here too.

The impact on the IT sector will depend on the new US President's policy. People believe that he may be a protectionist but the American firms may resist because they may prefer outsourcing as it is cheaper. So, we can't say who will have the final say. The US may not completely stop outsourcing; they may put some restrictions.

Automobile industry has already started feeling the pinch. There will be a chain of effects on other sectors also like retail and real estate.

The cautious approach of India in not fully opening up, and not going for full convertibility has helped. In India, 70 per cent of banking is by the public sector banks. Also, government control is very high in terms of cash reserve ratio and statutory liquid ratio. Therefore, Indian banks are not that much affected as their counterparts in the US or Europe.

Rich countries like the US can afford to live with crisis but it will be very serious in India. China, for example will be more affected than India in this crisis as it is heavily dependent on exports. Exports constitute 50 per cent of China's national income but in India, it is only 20-30 per cent. The more you are globalised, the more you will be affected.

Global Public Goods now like peace, climate change control, ozone depletion, improvement in bio-diversity are good for all the countries, and menace liketerrorism and spread of contagious diseases are bad for all. Similarly, financial crisis affects everybody, and no single country can solve these problems.

Also, the international economic situation has changed with China becoming very powerful and South East Asian countries becoming formidable. But most of the international institutions are dominated by the US and the European countries. So, realities must be reflected in the new governance.

You also need a coordinative mechanism anticipating and taking measures in such international crisis. G- 20 is an example.

International collective effort and co-operation is the need of the hour.  The point is, international governance is the most crucial need of the time. There should be a co-ordinated effort so that the crisis in one country does not spread to another country.

We cannot avoid globalisation. This is a technology driven process. Countries have become more and more inter- dependant. The question is, how do you make policies in an inter-dependant globalised village? We are lagging behind in finding an answer to the question.

The top 20 countries including China, Brazil, South Africa, etc together should take the initiative to find a new economic order.

I feel the crisis will be there at the most for two years. As everybody is affected, there will be a solution soon. There will be a new order after that.