'India, China will emerge stronger from the crisis' 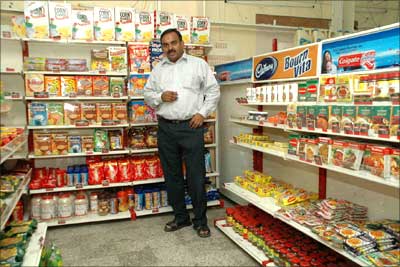 R Subramanian shared his views on global economic crisis and its impact on the retail sector with contributing managing editor Shobha Warrier.

We started getting signals about a global crisis from April this year. It was believed that India could stay decoupled and might not be affected by the sub-prime crisis in the United States.  But the magnitude of the problem and bankruptcy of Bear Stearns were clear signs India was not immune to this problem.

Coming to the retail sector, in India, it is in two parts - discretionary items like garments, television, refrigerators, etc, and staple food items like rice, wheat etc. We do not see any impact on staple food; however discretionary sales will go down as consumers will postpone buying those items. We see the need to re-look the cost of property especially those signed last one year. We see scope for renegotiation. It is also necessary to go for as much cost trimming as can be. This will be our core focus. We are waiting for an impending fall in property prices before we resume signing new properties for expansion. Yes, the world will start looking at globalisation from a different perspective now. The surplus cash from one country was fuelling growth everywhere earlier. So, the culprit is not globalisation. It is the overdependence on one single country as source of liquidity. Protectionism is clearly a short term strategy. Ultimately, if the economy has to grow, the need for efficiency is essential. If we live in a high-cost protected world, we will not see growth or efficiency. The US President-elect Barack Obama during the elections spoke against outsourcing, and IT and ITeS sectors have been an important job and economy driver in India. So, any pressure there would have an impact on the economy. Ultimately, retail is a proxy for the economy as it reflects final consumption but we can't be insulated from economy issues in any way. However, I am sure pragmatism will prevail once it comes to governance; most of the times, rhetoric is good for campaigns only. In a situation like this, value will be very important. People will look for value and skip all the non-essentials as much as they can. It is tough to see a sector that will not get affected, however value-retail would benefit when you look at the crisis from a longer term perspective as customers will seek more value. I expect the crisis to last for at least the next one-and-a-half years.  Most economies have suffered an 'asset bubble and burst cycle' in the past 20 years or so -  be it Japan or the US. The key is to be able to sanely intervene in the bubble days also. In the burst situation, there is huge effort to solve problems by infusing liquidity but there was never any such effort to contain the bubble.  I feel governments still see bull markets as good, and bear markets as bad but excessive bull markets create bear markets, and only timely intervention can help overcome the crisis. It is tough to say how various countries will emerge from this crisis. It is clear that redistribution of economic power will get hastened as the dominance of one economy will come down. At the end of the crisis, the emerging economies would come out stronger especially economies like India and china which are not really commodity-export intensive.

What is subprime crisis? How it caused financial mayhem?