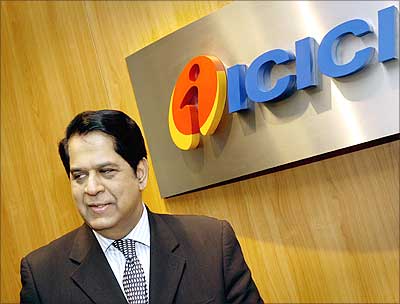 Stung by rumours that it was passing through a troubled phase, ICICI Bank on Tuesday asked its customers not to panic, saying rumours about the financial strength of the bank are baseless and malicious.

"ICICI Bank is aware that rumours are being repeatedly being circulated in certain centres regarding the financial strength of the bank. The bank states that these rumours are baseless and malicious," ICICI Bank CEO and Managing Director K V Kamath said on Tuesday.

The statement comes amidst reports that the bank's customers were queuing up before its branches in some cities particularly in Karnataka and Andhra Pradesh fearing that ICICI were facing major financial crunch.

'UK arm has no exposure to US sub-prime creidt'

About 98 per cent of its non-India investment book of $3.5 billion is rated investment grade. In addition, it holds cash equivalent instruments of $1.1 billion.

ICICI Bank had few weeks back made an additional provisioning of $28 million to cover its investments in the bankrupted US bank Lehman Brothers' senior bonds. This was in addition to $12 million provision previously made.

Kamath said ICICI Bank was profitable. "This was due to the strong core performance, which more than offset the impact of adverse debt and equity market conditions in India and globally since the second half of FY 2008."

"The absorption of the impact of current market conditions on investment portfolio valuation will not pose any challenge to ICICI Bank's capital position," he said.

"This is among the highest levels of capital adequacy in large Indian banks. This reflects the healthy capital position and comfortable level of leverage," he said. "Its banking and non-banking subsidiaries are also well-capitalised."  -- PTI