US radio host: Indians are 'slumdogs' 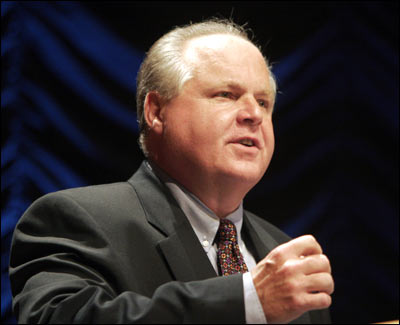 American talk show host Rush Limbaugh, who fashions himself as the new 'face' of the US Republican Party, has been accused of a lot of things: misogynist comments, prejudiced opinion on African Americans, insensitive remarks about the physically disabled and incendiary comments about homosexuals, to name a few.

On April 10, while discussing the outsourcing of jobs from America, Limbaugh viciously insulted India and her citizens, inanely referencing the Danny Boyle smash-hit film Slumdog Millionaire to make his point.

"There's a reason [these jobs] aren't coming back. They're outsourced for a reason, an economic reason, and they're not coming back," Limbaugh said, while speaking to a caller named Terry from Ohio. "If you're sitting out waiting for a job that's now being done by a slumdog in India, and you're waiting for that job to be cancelled, for the slumdog to be thrown out of work, and you to get the job, it ain't going to happen. It's not the way economics works."

Apparently Rush missed India's near double-digit annual growth over the last decade. Or that India is being mentioned as a potential viable member of the permanent UN Security Council. Or that India assumed a position of much importance at the recently concluded G20 Summit in London.

Just in case Limbaugh missed the memo: Globalisation is here to stay and India is a rapidly emerging economic superpower. Slumdogs we are not. Deal with it.

But, actually, this rash, unprovoked insult should come as no surprise. The garrulous Limbaugh's long career has been littered with sordid, controversial remarks. Yet, somehow, two decades have seen him develop from fringe shock jock to a mainstream political commentator, all without toning down his rhetoric or compromising on his extreme right-wing views.

Whereas he was once considered a jester in the Conservatives' Court, today he wields tremendous influence inside the mainstream Republican Party. Even national politicians, such as Republican Party leader Michael Steele, have backed down from Rush Limbaugh, rather than face his wrath.

Finally, he's been criticised in the past for his hyper-partisanship and blatant hypocrisy, ie, whatever Republicans do is right and whatever Democrats do is wrong, a critique which came to light again earlier this year. In January, as US President Barack Obama prepared to be sworn in to office, Limbaugh famously uttered, "I hope he fails," setting off a firestorm of controversy. Many in the media pointed out that only two years ago, in 2006, Limbaugh was chastising 'American liberals' for rooting for the failure of George W Bush, calling them traitors.

We can see it already, the 2012 US Presidential Election: Sarah Palin for President and Rush Limbaugh as her running mate.

Oh, Republican Party, the party of Abraham Lincoln, what's become of you?!?