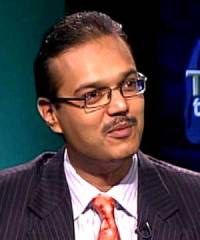 Morgan Stanley entered India in 1989 through an offshore fund --The India Magnum Fund. Ridham Desai, managing director and co-head (equity), has been with the firm since 1997. In an interview with Vandana, he speaks about the recent spike in the Indian stock market and the global recovery. Excerpts:

The Indian stock market has risen sharply by 60 per cent in just nine weeks. Do you see this rally continuing or is the market overheated, like it is being said about China?

Markets across the world have performed very well due to liquidity, which has been very strong across the globe, and now spreading to even risky assets. There is a belief that probably we are getting a v-shaped recovery. India is reflecting that as well.

Also, the astounding victory of the Congress-led United Progressive Alliance in the recent elections for a second consecutive term is a reiteration of the fact that people of the country believe in high growth rate. Those positive factors are clearly at play.

Foreign institutional investors are grossly under-invested in India. Their ownership of India's top-100 companies is at a five-year low. India is one of the best stories in the world and hence, FIIs have to increase their exposure. Our June 2010 target for the Sensex is 17, 000 on a base case basis.

The good news for India is that the economy is a lot more balanced, so we have a good balance of consumption and fixed investment. China is still overly dependent on fixed investment and is trying to square consumption. And, the bad news is that we have limited fiscal flexibility compared to China.

Earnings growth has been quite good this time. Which sectors surprised you on the positive side?

Earnings growth for this quarter is coming ahead of expectations. I expect a very strong growth as we move towards the end of this year. Earnings will actually recover quite smartly.

Consumer discretionary and industrials have surprised on the positive side. It depends a lot on how the monsoon shapes up in September. If it is bad, it could have an adverse impact. But I think rural India will still be okay.

They had loan write-offs and there was a lot of stimulus to the rural economy, such as the employment guarantee scheme. So, farmers would not be so distressed.

A lot of companies have restructured their balance sheets. Those who had large amount of debts have replaced it with equity, notably in real estate.

As far as capital investments are concerned, we don't expect a big recovery. It will take a while before private capex begins. The fact is that in the 12 months ending March 2008, private capex was at 16 per cent of the gross domestic product.

So, a lot of capacity has been created. It will take time for that to get utilised.

What reforms are needed to boost the investment cycle?

The Budget was a great booster. It is one of the better Budgets that India has seen in the past several years. The finance minister has acted like an entrepreneur.

He has taken the risk to revive growth. Everything that the market needs was there in the Budget document or outside it. So, policy reforms are not an issue.

We are looking at big tax reforms in the next 12 months. The FM has already said that a new direct tax code would be out by August. The goods and services tax should be coming next year.

We are also expecting a good amount of divestment to come. Disinvestment is important because it will give signals that there is a willingness to do something which was not done in the last five years.

We are looking at fiscal consolidation as well in the next two years. On the infrastructure investment side, we are looking forward to aggressive construction of roads which, I think, we will get. There are several Bills pending in Parliament.

How are valuations looking at the moment?

Valuations are okay, both on relative as well as absolute basis. The absolute valuations hit all-time lows earlier this year and are now at historical average levels. However, if earnings keep surprising on the upside, we may look back and say that valuations were not that expensive.

On a relative basis, India trades at 30-40 per cent to the rest of the emerging world. This premium reflects India's superior growth prospects.

What are the downside risks to this rally?

I think there are two relevant risks. One, of course, is what happens globally. If there is a major sell-off, that could have an impact. Relatively, India should still do better. The other concerns are domestic factors such as execution of reforms, or a terrible monsoon. If the government falters on reforms, that will be a problem.

The government is considering raising the public float to 25 per cent. If implemented, how will it impact stocks in the short term?

Historically, India had this problem of low float, which had inhibited foreign money inflows into the country. Low public float also restricts our market's weight in various indices.

So, if float goes up, I can only see it as a positive both in long term as well as short term. Add to that, the extra liquidity that will come will better the price discovery process and inspire more confidence among investors.

What is the reality check on green shoots of recovery being sighted globally?

Any recovery across the developed world is likely to be relatively soft, and not a full-blown one. Growth is not going to come back to levels we have seen during the last five years. So, it is a long process of consolidation.

There has also been a huge amount of stimuli, both in terms of monetary and fiscal, that are playing their role.

Obviously, the tail risk is out of the system. Financial markets, which had been on the verge of collapse last year, are no longer in that state.

But there are some structural issues that the developed world has to overcome -- notably their consumption and savings rate. They need to increase their savings rate and decrease their indebtedness. And that may take a few years to happen.

It may not apply to the developing world, where growth will be much better because of domestic factors.