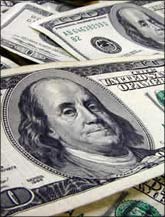 The world has spent a staggering $11.9 trillion  to wriggle out of the financial crisis, a sum which is enough to finance a Pound 1,779 handout for every person living on the planet, The Telegraph said quoting the International Monetary Fund.

"The cost of mopping up after the world financial crisis has come to $11.9 trillion (Pound 7.12 trillion) -- enough to finance a Pound 1,779 handout for every man, woman and child on the planet," The Telegraph said in a report.

Citing IMF calculations, the news report said, "Most of the cash has been handed over by developed countries, for whom the bill has been $10.2 trillion, while developing countries have spent only $1.7 trillion -- the majority of which is in central bank liquidity support for their stuttering financial sectors.

The whopping total cost of crisis is equivalent to around a fifth of the entire globe's annual economic output and includes capital injections pumped into banks in order to prevent them from collapse, the cost of soaking up so-called toxic assets, guarantees over debt and liquidity support from central banks.

"Although much of the total may never be called on, the potential outlay still dwarfs any previous repair bill for the global economy," The Telegraph said.

Source: PTI© Copyright 2021 PTI. All rights reserved. Republication or redistribution of PTI content, including by framing or similar means, is expressly prohibited without the prior written consent.
Related News: Telegraph, International Monetary Fund, IMF
SHARE THIS STORY
Print this article