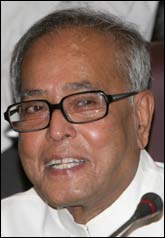 The government on Wednesday initiated radical tax reforms through a draft code that aims at moderating income tax rates, abolishing Securities Transaction Tax and increasing deduction for savings up to Rs 3 lakh (Rs 300,000).

Releasing the Direct Taxes Code that will ultimately replace the over four-decades old Income Tax Act and bring all other direct taxes like wealth tax under its purview, on Wednesday said if reasonable level of discussion happens on the code, a bill could be placed in the Winter Session of Parliament.

The code proposes to exempt the general tax payer from paying income tax if his income is Rs 1,60,000 in a year.

"We expect to have better compliance and better collection of taxes," Mukherjee said.

While the code proposes abolition of the controversial STT, it also suggests reintroduction of tax on long term capital gains on securities trading.

Home Minister P Chidambaram, who during his tenure in the finance ministry had initiated work on the Code, said that this was a brand new Code written from scratch.

The new code seeks to consolidate and amend the law relating to all direct taxes, that is, income-tax, dividend distribution tax, fringe benefit tax and wealth-tax so as to establish an economically efficient, effective and equitable direct tax system which will facilitate voluntary compliance and help increase the tax-GDP ratio. Another objective is to reduce the scope for disputes and minimize litigation.

Briefly, the salient features of the code are as under: (a) Single Code for direct taxes: All the direct taxes have been brought under a single code and compliance procedures unified. This will eventually pave the way for a single unified taxpayer reporting system.

(b) Use of simple language: With the expansion of the economy, the number of taxpayers can be expected to increase significantly. The bulk of these taxpayers will be small paying moderate amounts of tax. Therefore, it is necessary to keep the cost of compliance low by facilitating voluntary compliance by them.

This is sought to be achieved, inter alia, by using simple language in drafting so as to convey, with clarity, the intent, scope and amplitude of the provision of law. Each sub-section is a short sentence intended to convey only one point. All directions and mandates, to the extent possible, have been conveyed in active voice.

Similarly, the provisos and explanations have been eliminated since they are incomprehensible to non-experts. The various conditions embedded in a provision have also been nested. More importantly, keeping in view the fact that a tax law is essentially a commercial law, extensive use of formulae and tables has been made.

(c) Reducing the scope for litigation: Wherever possible, an attempt has been made to avoid ambiguity in the provisions that invariably give rise to rival interpretations. The objective is that the tax administrator and the tax payer are ad idem on the provisions of the law and the assessment results in a finality to the tax liability of the tax payer. To further this objective, power has also been delegated to the Central Government/Board to avoid protracted litigation on procedural issues.

(d) Flexibility: The structure of the statute has been developed in a manner which is capable of accommodating the changes in the structure of a growing economy without resorting to frequent amendments. Therefore, to the extent possible, the essential and general principles have been reflected in the statute and the matters of detail are contained in the rules/Schedules.

(e) To ensure that the law can be reflected in a Form: For most taxpayers, particularly the small and marginal category, the tax law is what is reflected in the Form. Therefore, the A-10 structure of the tax law has been designed so that it is capable of being logically reproduced in a Form.

(f) Consolidation of provisions: In order to enable a better understanding of tax legislation, provisions relating to definitions, incentives, procedure and rates of taxes have been consolidated. Further, the various provisions have also been rearranged to make it consistent with the general scheme of the Act.

(h) Providing stability: At present, the rates of taxes are stipulated in the Finance Act of the relevant year. Therefore, there is a certain degree of uncertainty and instability in the prevailing rates of taxes. Under the code, all rates of taxes are proposed to be prescribed in the First to the Fourth Schedule to the code itself thereby obviating the need for an annual Finance Bill. The changes in the rates, if any, will be done through appropriate amendments to the Schedule brought before Parliament in the form of an Amendment Bill.