Anil Dhirubhai Ambani Group, the parent company of Reliance Big Entertainment and Reliance BIG Pictures, along with Steven Spielberg and Stacey Snider, the principal partners of DreamWorks Studios, jointly announced on Monday that the Los Angeles-based company has completed the first phase of funding. 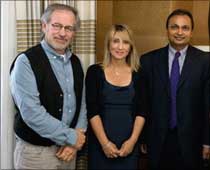 While making the announcement, Anil Ambani, chairman of ADAG, said, the partnership with Spielberg and Snider is the cornerstone of the company's Hollywood strategy.

He further said that despite the global economic crisis he was confident that 'this day would come', adding, "Now Stacey (Snider) and Steven (Spielberg) can focus on producing more of the great films for which they are renowned."

Thanking Ambani for his 'foresight and fortitude' Snider and Spielberg said that this would allow them to move ahead quickly into production with the first group of films.

DreamWorks has a long-term distribution deal with The Walt Disney Studios which will market and distribute approximately six films a year for the company.

In India, however, Reliance Big Entertainment holds the distribution rights.

The first release - Harvey - under Disney's Touchstone banner is expected in late 2010.

Reliance Capital vice chairman Amitabh Jhunjhunwala and JP Morgan's Alan J Levine, who helped Reliance structure the financing deal, are joining Snider and Spielberg on the DreamWorks board of directors.

The partnership between ADAG and DreamWorks will last at least three years.