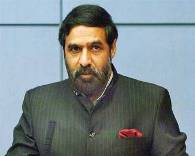 India on Thursday extended tax holiday and duty refund for exporters, while allowing duty free capital goods import under its Foreign Trade Policy to insulate them from protectionism induced by recession abroad.

Unveiling the five-year policy, Commerce Minister Anand Sharma set a target of $200 billion worth exports for next fiscal, a feat that India failed to achieve in 2008-09 due to a slump in global demand in the face of financial crisis.

"India has not been affected to the same extent as other economies of the world, yet our exports have suffered a decline in the last 10 months due to a contraction in demand

in the traditional markets. The protectionist measures being adopted by some of these countries have aggravated the problem," he said, presenting his first trade policy.

While exports for the April-June quarter contracted by 31 per cent, Sharma set a growth target of 15 per cent for FY'10.

"I would be hesitant to hazard a guess on the nature and extent of this recovery and the time the major economies will take to return to there pre-recession growth levels," he said, encouraging exporters to look beyond traditional markets like the US and western Europe.

The extension of income tax holiday for export units for one more year and continuance of duty refund scheme till December 2010 and enhanced assistance for the scheme for development of markets are among the measures in the FTP.

The aim of the policy, which would be reviewed after two years, would be to "arrest and reverse declining trend of exports," Sharma said.

Exports have been on a decline for the past 10 months. Exports in FY'09 amounted to $168 billion and the country hopes to maintain the same level this fiscal.

Expressing confidence that the country would be able to achieve a 25 per cent growth rate after two years, Sharma said, "By 2014, we expect to double India's exports of goods and services."

"Announcing the FTP in this economic climate is indeed a daunting task. We cannot remain oblivious to declining demand in the developed world and we need to set in motion the strategies and policy measures which catalyse the growth of exports," he said.

The government, he added, would encourage exports through a "mix of measures including fiscal incentives, institutional changes, procedural rationalisation and efforts for enhance market access across the world and diversification of export markets.

The policy, Sharma said, would provide a special thrust to the employment-oriented sectors which have witnessed job losses in the wake of recession, especially in the fields of textiles, leather and handicrafts.