News
Business
Movies
Sports
Cricket
Get Ahead
Money Tips
Shopping
Sign in  |  Create a Rediffmail account
Rediff.com  » Business » There is no dearth of liquidity in the economy: Pranab

There is no dearth of liquidity in the economy: Pranab

Excerpts from the Finance Minister's speech at the Business Standard Awards ceremony.

After five years, when I am amidst you, the backdrop has changed. Since the economic reforms of the early Nineties, the expectations of the people, industry and the civil society from the government have increased substantially. 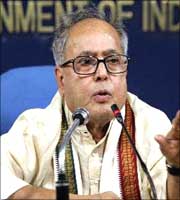 The last two years have been a difficult period for the Indian economy. We had to confront three major challenges originating in our external sector.

First, there was a surge of capital inflows which peaked in the last quarter of 2007-08. Second, an inflationary explosion in global commodity prices hit us with great force in the middle of 2008. There was barely any time to deal with this problem before the third problem, the global financial meltdown and a collapse of international trade, hit the world with all its severity.

On the domestic front, developments in recent weeks indicate that we may be heading towards sub-normal monsoons with its implications for agricultural growth and prices of certain essential commodities. Each of these developments has raised multiple concerns for our policymakers, sometimes even conflicting.

Despite some difficult choices and uncertainties due to the rapid changes in the global situation, the short term challenges arising from these shocks have been met quite successfully.

The decline in the growth rate has affected the pace of job creation in certain sectors of the economy and the business sentiments. At the same time, it resulted in considerably lower revenue growth for the government. Moreover, efforts to stem the fall in growth rate through delivering fiscal expansion, though very successful in the short term, have raised legitimate concerns over the sustainability of fiscal correction achieved since the institution of the FRBM Act.

There are also concerns about the new found growth momentum of the economy in the medium term. It is essential for us to come back to the path of fiscal prudence, without compromising on the growth momentum, as soon as the current economic circumstances permit us to do so.

Serious concerns have been voiced on the implications of the government's borrowing programme. My response to that genuine concern is that up to now, we have managed well. The way we have managed the borrowing programme with the cooperation of the Reserve Bank of India, it has not elbowed out the legitimate credit requirement of the private sector.

Further, taking cues from RBI's policy rates and easy liquidity conditions, public sector banks have signaled a reduction in deposit and lending rates. Considering the comfortable liquidity position, there is no reason to express concern about the availability and cost of credit to meet the legitimate requirement from the private sector.

The global financial crisis did not affect the Indian banks and financial institutions directly. But it did not mean that we remained totally unexposed. It did expose a number of weaknesses in our financial system.

Notwithstanding some uncertainty associated with progress of the monsoon and the revival of the global economy, there are other factors that favour economic revival. There has been an increase in FDI during 2008-09, there are signs that FIIs, which had recorded net outflows in 2008-09, may have returned to the Indian market in the last two months, the credit market appears to be working normally and there is no dearth of liquidity in the economy.

The index of industrial production has shown signs of revival in recent months. More importantly, the government has continued its fiscal stance in supporting an early revival.

For us economic growth has to be an instrument for development and not an end in itself. It has to be not just inclusive but also equitable so as to sustain over a longer period. In the last five years, we have moved steadfastly in that direction.

It is my belief and expectation that Indian entrepreneurs will continue to contribute effectively in our journey ahead to achieve the shared vision.