The best home loan rate war is on 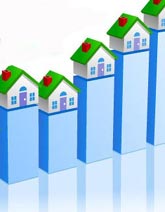 After calling State Bank of India's 8 per cent home loan offering 'a gimmick', Housing Development Finance Corporation jumped on the dual-rate bandwagon yesterday with its 'festive' 8.25 per cent offer for home loan seekers.

The offer, which will be valid for loans sanctioned till January 31, 2010, is likely to provide more options to potential home buyers. Already, there are a number of players offering attractive rates.

If one goes simply by numbers, the lowest rate is offered by Bank of Rajasthan (BoR) -- at 7.5 per cent per annum -- a good 50 basis points less than the SBI offer. Development Credit Bank is offering 7.95 per cent for the first year.

Then, there are a lot of players who are offering 8 per cent rate in the first year such as Axis Bank Power Plus, State Bank of Bikaner and Jaipur and Canara Bank.

But for home buyers, the first year rate should not be the most important factor. Reason: Home loans are normally for a period of 15 to 20 years.

Consequently, if the rate is low in the first few years and shoots up later, home buyers are going to find themselves under serious financial strain.

HDFC's dual-rate offering is quite comparable at 8.25 per cent till March 2012, and then at a floating rate which is 500 basis points below their benchmark.

Before deciding on the best rate, one also has to look at costs such as processing fee. BoR charges 0.5 per cent to 1 per cent of the loan amount, HDFC 0.5 per cent and SBI nil.

From the fourth year, the floating rate will be a function of the bank's existing cost of funds and the benchmark rate.

Though it is quite difficult to predict the future rate of interest, to get some idea about the outflows, one can use today's benchmark rates and calculate the average rate of interest per year.

And the number would look something like this. BoR is offering the best rate at 8.53 per cent, followed by HDFC and Axis Bank at 8.63 and 8.65 per cent, respectively. At 8.76 per cent, SBI's rate comes fourth.

This rate war gives the potential borrower a lot of options. For individuals, who want to buy a home now, the entry rates are very competitive. They can pay lower EMIs now, and pay higher when their incomes improve after three years.

However, they will need to work out the cost of shifting as it entails a prepayment penalty.