Court bans sale of Microsoft Word in US

Microsoft has lost an appeal in a patent dispute with Canadian company i4i with the US Court of Appeals for the Federal Circuit ordering the software giant to stop selling Microsoft Word 2007 and other Office 2007 products by January 11. 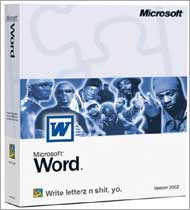 The court also hit Microsoft with a $287 million fine.

Microsoft lost a patent infringement suit against XML specialists i4i back in May when it was found that Word's handling of .xml, .docx, and .docm files infringed upon i4i's patented XML handling algorithms, but the injunction against further Word sales was put on hold pending the results of this appeal.

In August 2009, a US judge had ordered Microsoft to stop selling Microsoft Word in its current form in the US as it infringes upon a patent owned by a Canadian company, i4i.

Judge Leonard Davis of the US District Court for the Eastern District of Texas had passed an injunction to this effect and has given Microsoft 2 months within which the software giant must comply with the order.

However, reports suggest that the patent ruling will have not much effect on Microsoft. The Washington Post said that the ruling only upholds a judge's injunction issued after a district court jury found that a feature in Word 2007, and the Office 2007 suite that includes Word, infringed a patent held by i4i, a Toronto software developer.

Meanwhile, Kevin Kutz, director of public affairs, Microsoft Corporation, said in a media statement: 'We have just learned that the Court of Appeals for the Federal Circuit has denied our appeal in the i4i case.  We are moving quickly to comply with the injunction, which takes effect on January 11, 2010.'

The statement adds that the 'injunction applies only to copies of Microsoft Word 2007 and Microsoft Office 2007 sold in the United States on or after the injunction date of January 11, 2010. Copies of these products sold before this date are not affected.'

Microsoft also said that it has put the process in motion to 'remove the little-used XML features from these products.' 'Therefore, we expect to have copies of Microsoft Word 2007 and Office 2007, with this feature removed, available for US sale and distribution by the injunction date. In addition, the beta versions of Microsoft Word 2010 and Microsoft Office 2010, which are available now for downloading, do not contain the technology covered by the injunction,' the statement added.