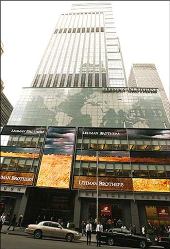 The administrators of the European operations of the failed Lehman Brothers will return assets worth over $11 billion to the investors.

More than 90 per cent of the affected investors at Lehman Brothers International Europe are in support of the plan to return the assets.

PricewaterhouseCoopers -- whose partners are the administrators -- said on Wednesday it got the support of over 90 per cent clients for the claim resolution agreement.

The CRA, a multilateral contract between Lehman Brothers Europe and its clients, governs the basis on which assets can be returned.

"Under these arrangements, the administrators expect to return over $11 billion of the client assets," PwC said.

Lehman Brothers Europe had some $32 billion of client assets as on September 15, 2008 -- the day, when its American parent firm Lehman Brothers filed for bankruptcy in the US.

Since that date $13.3 billion has been returned.

According to the statement, the agreement allows the failed financial titan to distribute the remaining trust property during 2010.

The collapse of the famed Lehman Brothers had worsened the financial turmoil in the US which pushed the global economy into a tizzy.