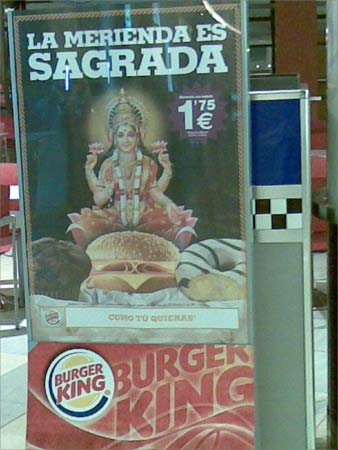 A US-based Hindu advocacy group has asked American fast food chain Burger King to immediately remove an advertisement campaign featuring Goddess Lakshmi, which it say is "offensive" to the people of the faith.

Washington-based Hindu American Foundation said Burger King is running a print advertisement in Spain that depicts an image of the goddess seated atop a meat sandwich and other foodstuff with the catch phrase, "A snack that's sacred," in Spanish.

In the letter written to the company, the HAF has also sought an apology from it for demonstrating lack of cultural and religious sensitivity in this case.

"An advertisement knowingly and intentionally using sacred symbols, especially those of another religious tradition for purely commercial purposes can be offensive in and of itself," said Suhag Shukla, managing director and legal counsel for the Foundation.

"Compounding this insult is the use of the sacred image for the sale of a meat product -Burger King's judgment in associating a burger with a Hindu goddess is absolutely baffling," Shukla said in a statement.

There was no immediate response from the media office of Burger King, when contacted by PTI.

Shukla told PTI, the Foundation had written a letter to corporate headquarters of Burger King last Tuesday. "There has been no response from them," he said.

Lalit K Jha in Washington
Source: PTI© Copyright 2020 PTI. All rights reserved. Republication or redistribution of PTI content, including by framing or similar means, is expressly prohibited without the prior written consent.
SHARE THIS STORY
Print this article