News
Business
Movies
Sports
Cricket
Get Ahead
Money Tips
Shopping
Sign in  |  Create a Rediffmail account
Rediff.com  » Business » US economy is back from the brink: Obama

US economy is back from the brink: Obama 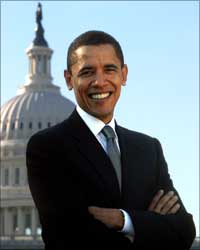 US President Barack Obama on Thursday said he has managed to pull the American economy back from brink; which has been experiencing the worst recession since the great depression of the last century.

"As a result of the actions we took in those first weeks, we've been able to pull our economy back from the brink," Obama asserted at his prime time conference at the White House; which mostly dominated the health care reform.

"Now, six months ago, I took office amid the worst recession in half-a-century. We were losing an average of 700,000 jobs per month and our financial system was on the verge of collapse," Obama said.

The US President said his administration took steps to stabilise the financial institutions and the housing market.

"We passed a Recovery Act that has already saved jobs and created new ones, delivered billions in tax relief to families and small businesses, and extended unemployment insurance and health insurance to those who've been laid off," he said.

Observing that there is still a long way to go, Obama said the Recovery Act will continue to save and create more jobs over the next two years, just like it was designed to do.

"I realise this is little comfort to those Americans who are currently out of work. And I'll be honest with you: New hiring is always one of the last things to bounce back after a recession," he said.

The fact is, even before this crisis hit, the US had an economy that was creating a good deal of wealth for those folks at the very top, but not a lot of good-paying jobs for the rest of America, he argued.

"It is an economy that simply wasn't ready to compete in the 21st century, one where we've been slow to invest in clean-energy technologies that have created new jobs and industries in other countries, where we've watched our graduation rates lag behind too much of the world, and where we spend much more on health care than any other nation, but aren't any healthier for it," Obama said.

"That is why I have said that, even as we rescue this economy from a full-blown crisis, we must rebuild it stronger than before," he added.