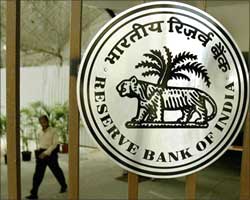 The Reserve Bank of India might change its bias towards softening interest rates into a more cautious outlook but is expected to keep key policy rates unchanged in the monetary policy review on Tuesday.

At the same time, banking sources close to the development said the central bank could raise its growth target from 5-6 per cent to 6.5 per cent to accommodate the impact of an improving monsoon and the growth impetus provided through various fiscal and monetary stimulus packages earlier in the year.

The cautious outlook on interest rates is primarily to accommodate rising inflationary expectations in the economy.

"Around October-November, the base effect, which is keeping inflation rates down, will no longer apply. Therefore, rising food prices will also start showing on the wholesale price index. Besides, the consumer price index is highly inflated," said the source.

This apart, a string of fiscal and monetary packages announced by the government and the RBI after the global credit crisis intensified last September are expected to result in high liquidity that could be inflationary in nature. "Thus, the inflation index will soon start going up and that needs to be incorporated in the outlook for interest rates in the coming days," the sources added.

RBI could, however, raise rates towards the second half of the financial year, if not before, but is likely to maintain status quo for now, they added.

Since October, the RBI has lowered the cash reserve ratio (the proportion of deposits that banks set aside), 400 basis points to 5 per cent to increase liquidity in the system and encourage banks to lend more to companies.

Sources said the RBI has also decided to maintain status quo in the various stimulus measures announced since September 2008 to provide additional rupee as well as foreign exchange liquidity in the system.

The central bank had opened special windows to ensure that mutual funds, non-banking finance companies, small and medium enterprises and the banking system had enough funds at their disposal to deal with the higher demand locally after the credit crisis. But the windows have been largely unused for several weeks now, with banks consistently parking over