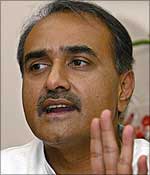 The minister added that Paramount Airways was the only airline, which made profits during this period.

In reply to another query, he said guidelines have been issued to domestic airlines for adopting effective training programmes for their Indian pilots to replace foreign pilots.