Military insurance: Will it come to India? 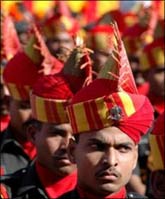 When we look at the men and women in uniform, we automatically think about the courage and valour with which they lead their lives. However, risking their lives and consequently leaving their families to the mercy of government compensation or pensions is something that these brave men and women constantly worry about.

So how does a military personnel protect himself/herself? Would normal life insurance suffice? The answer to this quandary has been prevalent in the West for quite sometime now -- Military Insurance.

One of the commonest questions regarding the need for specialised military insurance is why one needs to take it in the first place, as in, why take up military insurance when the government is known to give generous benefit to military personnel, who put their very lives at risk in the defence of the country.

But a closer look at the figures shows that direct financial help from the state to military personnel has been steadily falling, and servicemen and officers are being increasingly advised to make some preparations -- like taking up insurance cover while still in military service -- to supplement what they get from the government.

In the case of service life insurance, there is the peace of mind of knowing that should one lose their life in the line of service, their loved ones won't be exposed to financial distress. Not having such service life insurance on the other hand means that you have to go about your service to the nation with the uncertainty of what could happen to your loved ones (who might include some young children), should the worst befall you.

Granted, most governments do provide so sorts of benefits to veteran's family whose breadwinners lose their lives in the line of duty. But more often than not, such support can be inadequate for a growing family, or slow in coming, hence the need for every army officer or servicemen who cares deeply about their family to take army insurance to supplement the benefits from the government, and support the family as they await for such government aid to materialize.

It is important to note that the military provides group insurance to military personnel. However, with the growing financial requirements while running a family, this insurance might not be adequate. We can only wait and watch, when such insurance will be available in India.