Say no to Bangalore, yes to Buffalo: Obama 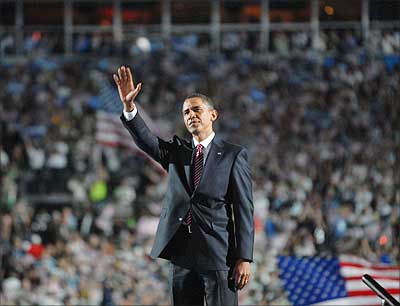 'Say no to Bangalore and yes to Buffalo,' seems to be the latest mantra of United States President Barack Obama as he struggles to bring the ailing American economy back on track.

Meeting one of his major election promises, Obama on Monday the announced end of years of tax incentives to those US companies which create jobs overseas in places like Bangalore.

Instead, the incentives would now go to those creating jobs inside the US, in places like the Buffalo city -- bordering Canada in upstate New York.

"We will stop letting American companies that create jobs overseas take deductions on their expenses when they do not pay any American taxes on their profits," Obama said at White House announcing the international tax policy reform.

"We will use the savings to give tax cuts to companies that are investing in research and development here at home so that we can jump start job creation, foster innovation, and enhance America's competitiveness," Obama said.

The new tax laws are expected to majorly hit countries like India, China and the Philippines, where US companies have been outsourcing their work.

Hitting hard at the current taxation system, to which he had been very critical since his election days and as a Senator, Obama said: "It's a tax code that says you should pay lower taxes if you create a job in Bangalore, India, than if you create one in Buffalo, New York."

Reiterating his campaign rhetoric, the US President said: "The way we make our businesses competitive is not to reward American companies operating overseas with a roughly 2 per cent tax rate on foreign profits; a rate that costs taxpayers tens of billions of dollars a year."

Obama said he wants US companies to remain most competitive in the world. "But the way to make sure that happens is not to reward our companies for moving jobs off our shores or transferring profits to overseas tax havens," he argued.

Announcing a set of proposals to crack down on illegal overseas tax evasion, close loopholes, and make it more profitable for companies to create jobs in the US, Obama said his series of tax reforms would save $210 billion in the next 10 years.

Under new measures, American companies would also have to disclose before the IRS the details of the income American citizens are generating in overseas accounts.

"For years, we've talked about stopping Americans from illegally hiding their money overseas, and getting tough with the financial institutions that let them get away with it," he said. -- PTI

Lalit K Jha in Washington
Source: PTI© Copyright 2022 PTI. All rights reserved. Republication or redistribution of PTI content, including by framing or similar means, is expressly prohibited without the prior written consent.
Print this article