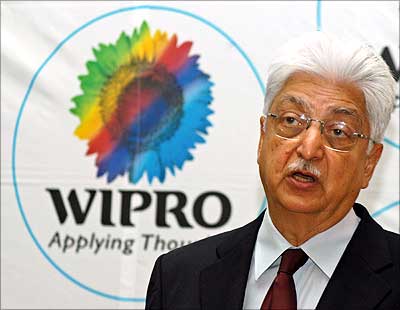 Wipro's executive chairman, Azim Premji, was scheduled to visit editors at BusinessWeek on Friday. He got hung up in holiday traffic, but, still, I managed to interview him on a car ride from Rockefeller Center, where he had been interviewed by CNBC, to Wall Street, where he was meeting with executives of the NYSE.

I think he gave the most lucid statement of the Indian position on America's guest worker visa controversy that I have heard. Here's the transcript of our conversation:

Som Mittal of Nasscom was here yesterday. He talked about the the 50-50 provision in the Grassley-Durbin bill in the US Senate. Mittal says it could have a major impact on the Indian tech industry - basically preventing you from hiring H1Bs in the US or bringing L1s in. How do you see things?

In my opinion it's a very drastic initiative that these two senators are trying to get through the senate. It will choke the United States of talent coming in. You will not be able to substitute the absence of this talent with local hires, because it's not easily available.

Also, you'll generate a trade war with countries such as India. It's a freedom-of-trade issue. It's precisely what President Obama said in the G20 meeting: The United States will not get into a spate of protectionism.

This should be looked at as a comprehensive immigration issue. Few of the people who come here on H1B visa are here for more than 18 months. They're here to do a specific job for which their presence is required. If the job can be done by an American, we'll hire an American. It doesn't cost us more to hire an American. So they're raising issues about a short term requirement for generating employment, and reducing it to a trade issue.

On the other axis, we're so open to global corporations to bid on exactly the same terms as Indian corporations. You'll get a spate of protectionism coming, I have no doubt. You can see it in China, but they do it very subtly. Nearly 55 per cent of the economy of China is government.

To me the acid test is what is the average rate of unemployment in the US economy. It's around 9 per cent. What's the average unemployment rate among engineers and it professionals? Below 4 per cent. You're protecting a very privileged community which is getting good salaries, and you're causing a whole side effect and impression of protectionism in the United States.

These are critical industries for emerging countries. The software and BPO industries for India represents 24 per cent of our exports. It represents 44 per cent of our labor force coming onto urban markets. There's no way our government can take it lightly. It's a vital piece of the economy. It's like your automobile industry. It's a vital piece of your economy, whether you like it or not.

What happens if the bill passes? What will be the impact, and how will you respond?

I think your president is to sensible to pass it. He's too mature. This is a very short term approach. To me it's a far more important decision than the tax on foreign profits. It's far more important from the point of view of national image and protectionism by the United States.

Please don't underestimate its impact. Every low-cost country today is putting bets on IT: Philippines, Vietnam, China. They're all there. Eastern Europe is there. Global trade in IT is as vital as global trade in manufacturing. If anything, it's more vital because the economies of all countries are getting more and more the dominance of services, versus manufacturing and agriculture.

If it was passed, how would you react?

We have already started to react. We anticipated this. We started ramping up our Atlanta center with local hires, fresh from campus. We're doing the same thing in Troy, Michigan. Also, we're taking more work offshore to be able to do more work without requiring visas.

And we're doing more virtualisation. You execute a project which requires more customer interaction through the use of an electronic interface. So we're finding solutions. There will be transition periods during which business will suffer.

The mix of technical people has traditionally been 25 people on site for 75 offshore. We can bring it down to 10 to 12 per cent. It will happen.

Why are IBM and Accenture employing so many people in India?

They like the labor rates, the quality of the people, the willingness to work hard. They're not getting the people they need in the United States. That's the bottom line.