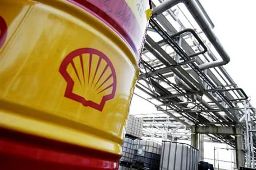 Because of the weak global economy, Royal Dutch Shell reported Thursday a sharp drop in third-quarter earnings and production and said it would cut 5,000 jobs.

The 5,000 jobs would be cut from the Anglo-Dutch oil and gas group as part of a restructuring that began earlier this year.

The job losses are part of a programme called Transition 2009, which was put in place by Peter Voser, who started as chief executive in July. The cutbacks represent some 4.9 per cent of the corporation's 102,000-member staff, and almost 10 per cent in those divisions Shell is merging.

Voser said the corporation had to take 'stringent measures to further improve our performance' and its 'competitive cost position'.

Although the corporation had "some indications that energy demand and pricing are improving," he said, "the outlook remains very uncertain, and we are not expecting a quick recovery."

Voser said the reorganisation, due to be completed by the end of the year was "progressing well" and had already reduced operating costs by $1 billion (0.676 billion euros) in the first nine months of this year.

This was more than the $2.62 billion analysts had predicted. Basic CCS earnings per share decreased by 72 per cent versus the like quarter a year ago.

Net profits amounted to $3.2 billion, compared with $8.5 billion in the like period last year. The decline in oil and gas prices hit Shell's upstream division, which saw profits fall 82 per cent to $1.54bn as oil and gas production fell.

Seema Hakhu Kachru in Houston
© Copyright 2021 PTI. All rights reserved. Republication or redistribution of PTI content, including by framing or similar means, is expressly prohibited without the prior written consent.