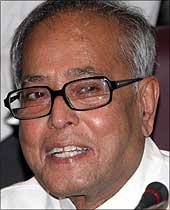 Finance minister Pranab Mukherjee has said that India will not be able to sustain high fiscal deficit in the long run, but he did not give any timeframe for withdrawing the stimulus measures that inflated the deficit.

As Prime Minister Manmohan Singh shared with industry leaders in New Delhi on Sunday, his government's intent to wind down stimulus measures next year, Mukherjee told reporters in St Andrews, Scotland, that he had already told Parliament high fiscal deficit was not sustainable in the long run.

India's fiscal deficit is projected to be 6.8 per cent of GDP this fiscal, consequent to duty sops given last year to the industry to insulate it from the effects of the global economic crisis.

Mukherjee said efforts would be made to reduce fiscal deficit to four per cent of the GDP and revenue deficit to 1.5 per cent by 2012.

Echoing the sentiments expressed by the prime minister, he said that the economy would grow by more than seven per cent next fiscal.

"In the next year, we will have growth projection of more than seven per cent," he told reporters on Sunday evening after a G-20 finance ministers' meeting.

With regard to the current fiscal, he said the country was likely to register an economic expansion of 6.5 per cent, less than the 6.7 per cent recorded in 2008-09.

With the government providing stimulus packages to help the economy combat the impact of the global crisis, the fiscal deficit is estimated to soar to 6.8 per cent of the GDP during 2009-10.

Replying to questions on the impact of the monsoon on the economic growth and prices, Mukherjee said the country had enough buffer stock of wheat and rice and was also importing essential items to supplement domestic supply.

"On the whole, the food scenario appears to be bright," he said.

Although the overall inflation, based on movement in wholesale prices, has been hovering around 1 per cent, the recent data released by the government revealed that food inflation has shot up to more than 13 per cent.

Referring to the purchase of 200 tonnes of gold by the RBI from the IMF, Mukherjee said India has a forex reserve of $285 billion and "we have spent $6.5 billion to buy the precious metal."

"In 1991, we pledged our gold, now the situation is reversed," he said, pointing out that the purchase of gold will not have any impact on the rupee value.

Replying to queries on British Prime Minister Gordon Brown's proposal at G-20 meeting for Tobin tax on financial transactions, he said,"We have yet to get full details of the proposal."

Earlier, Brown had called on the G20 to consider a tax on financial transactions to make banks more accountable to society.

As regards the issues of climate change, Mukherjee said they would be discussed at the Copenhagen summit in detail and stressed that developing countries will have to contribute to the efforts, which may need about $80 billion by 2030.

On the Cabinet's recent decisions on disinvestment, he said the timing for offloading of government stake in PSUs would depend on market conditions.

The Cabinet has recently decided that all profitable listed PSUs will have to offload at least 10 per cent government equity to public and the unlisted profitable state-run firms will have to come up with public offers.

H S Rao in London
© Copyright 2021 PTI. All rights reserved. Republication or redistribution of PTI content, including by framing or similar means, is expressly prohibited without the prior written consent.