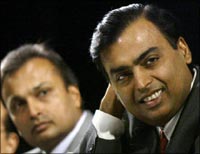 Mukesh Ambani's Reliance Industries Ltd on Wednesday told the Supreme Court that the demerger scheme worked out with his brother Anil Ambani was categorical that the gas supplies from the KG Basin to his group was not for trading and meant for promoting power generation plant.

"The real purpose of supply of gas to the Anil Ambani firm was for promoting electricity plant and not promoting trading in gas," senior advocate Harish Salve, appearing for RIL, told a Bench headed by Chief Justice K G Balakrishnan.

"The idea was to promote power distribution and transmission company... Clause (2) of the family MoU which the demerger scheme picks up as an important clause deals with promoting power plant and not for making money on trading of gas," he submitted before the Bench, also comprising Justices B Sudershan Reddy and P Sathasivam.

Anil Ambani's RNRL had sought immediate supply of gas as per the Bombay High Court order of July 15. This was opposed by RIL which said the gas was meant for the proposed plant in Dadri in Uttar Pradesh which had not come up and not for trading.

The Ambani brothers are locked in a bitter battle over the supply and price of the gas from KG basin.

While RNRL is seeking gas at a committed price of $2.34 per unit, RIL says it cannot honour the commitment made in the family agreement due to government's pricing and gas policies.

RIL, which has maintained that the family MoU of 2005 could not be the document for arriving at suitable arrangement for the supply of gas, said it (MoU) only sets down the "road map and guidance" on how things were to be worked out.

"The MoU had set a roadmap for how the demerger should be done depending on various approvals including those cleared by the board, shareholders, etc. The document doesn't bind the company as the board of directors and the shareholders had not approved it," Salve said.

He contended that only the extract of the MoU was placed before the RIL board and neither of the Ambani brothers had any objections.

Salve said the arrangement was for supply of gas to the Anil Ambani's group's power plant (Reliance Energy Ltd) and not to RNRL which is promoting the gas-based energy plant.

"The mere fact that the directors had knowledge about its chairman signing the MoU with his brother was not enough," Salve said, adding that the MoU did not even envisage that RIL will supply gas at $2.34 per mmBtu.

The division bench of the Bombay High Court even while upholding the family MoU had said that it was not a final word and was subject to the government's approval and the demerger scheme.

Nothing has progressed on gas supply beyond negotiations, Salve said.

RIL's gas output to double by next fiscal